Omar Kamal at The Appel Room on October 18 — One Night Only! 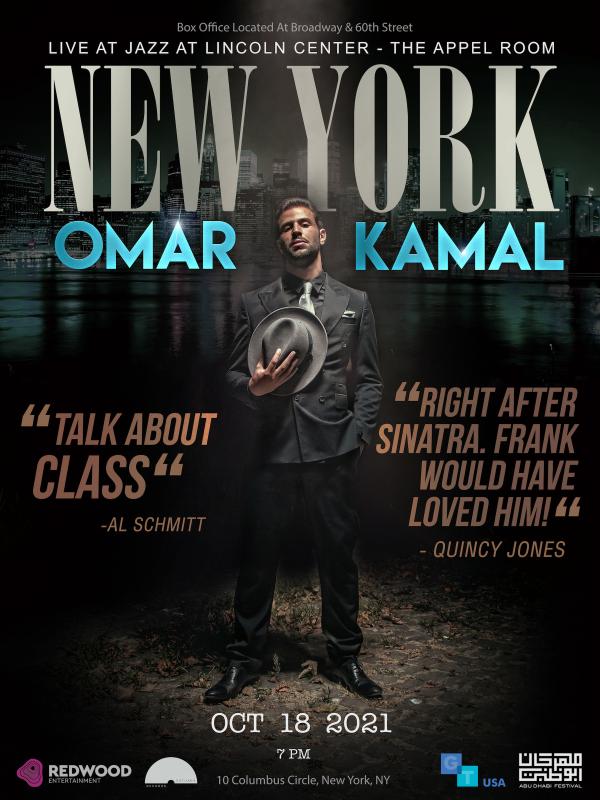 slideshow
Omar Kamal has a voice that transcends borders and decades. His honest, pure power and capacity for connection is the same genius that has defined the careers of the greatest singing legends – influences felt in his eclectic catalogue and captivating performances from Sinatra’s jazz and swing to timeless Arab idols like Mohammed Abdel Wahab and Fairouz. In concert, he has a free-wheeling style that blends various eastern and western styles to create his own unique sound of what it is to be a modern Arab artist today. Kamal brings together stunning repertoires and emotional hits for one enchanting evening at the Appel Room.

Omar Kamal is a singer/composer from Nablus with multicultural influences giving him a rich taste in music ranging from Swing kings like Frank Sinatra to Pop legends such as Michael Jackson, and returning back to Arabic greats such as Mohammed Abdelwahab and Fayrouz.

Omar performs a variety of genres in a number of languages, was classically trained playing the piano, and composes his own music. All these components make Omar one of the most authentic and open artists to emerge from the region in years.

Work on Omar’s debut album began in early 2015 with Emmy winning producer Dave Pierce (Michael Buble, The Frank Sinatra Estate) and legendary producer Bob Rock (Metallica, Jon Bon Jovi, Aerosmith) with a number of exciting international collaborations and some of the greatest session players who have worked with the likes of Michael Jackson and Sir Paul McCartney. Recording of the album took place in London, Las Vegas, Los Angeles, Vancouver and the prestigious Capitol Studios in Hollywood with the album—Serenade—released in 2017.

The huge success of Omar’s debut album was followed by a successful musical tour, during which he performed in major cities such as London, Amman, Manama, Abu Dhabi, Giza Pyramids, and opened one of the leading festivals in the Arab world at the Beiteddine Palace in Lebanon. Omar was awarded the DIAFA international award later that year for the best upcoming Arab artist category.

In 2018 Omar began work on his second album, titled Show Me The Light inspired by the journey to light through music. The music on the album combined the best of international efforts through featuring orchestrators from LA to London, Lyricists from Lebanon to Chile, and session players from London to Istanbul, all pulled together by the vision of Omar Kamal as executive producer. The album title track “Show Me The Light" entered the UK top 10 chart positions in 2019.

“Right After Sinatra. Frank Would Have Loved Him" —Quincy Jones

“He's brilliant! Who would believe this young man grew up in the West Bank?" —Becky Anderson, CNN International

“It’s through sheer talent that his rise to fame came in a record period of time?" —Zahi Wehbe

“It’s all about international, and I believe he represents the future of music" —Bob Rock