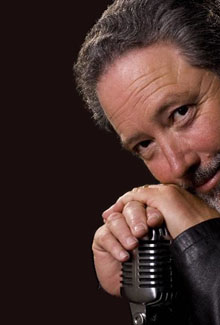 slideshow
Great American Songbook Preservationist and classic-jazz-standards singer Ron Kaplan is making a rare concert appearance in New York City on July 10 and 11 to present his “New York Song Collection" (a select group of songs taken from his album entitled New York). Kaplan will perform at Feinstein's at the Regency Hotel, located at 540 Park Avenue, NYC.

Singer Ron Kaplan keeps the flame burning brightly to illuminate jazz standards, the Great American Songbook and the classic sound of singers of the Fifties. The epitome of a “saloon singer," Kaplan has a rich, warm voice that literally cocoons the listener within the cozy atmosphere of images it creates.

“Ron Kaplan is an original personality in the world of jazz vocalists and he has managed to put his name into that previously closed inner circle. He has breathed new life into it by the sheer force of his style, for as you know, “the style is the man himself". The Velvet Crooner and the elegant power of his seemingly casual phrasing is in fact, ultra-tight and perfectly seductive… Jean Szlamowicz, Jazz Hot"

In addition to his career as a concert performer and recording artist, Kaplan also is the founder and executive director of American Songbook Preservation Society, a non-profit organization whose mission statement is: “To preserve our cultural treasure known as the Great American Songbook by performing this music to the public at home and abroad as Ambassadors of Song."

This very special musical fanfare will be a NY evening to remember. Ron is delighted to bring this recording to Feinstein's Loews Regency under the musical direction of Steinway Artist and New Yorker Pete Malinverni.

Making his New York visit even more special, Kaplan will perform some of these New York Songs and talk about this classic material on one of the city's top talk shows, “The Joey Reynolds Show" (on WOR 710 and nationally-syndicated) on Thursday, July 9, starting after midnight.

The New York CD is available by request for review purposes in print or online media.

One of our finest contemporary singers of jazz standards, Ron Kaplan has spent his entire career championing the Great American Songbook, with much of that classic material written in or about New York City. So it makes perfect sense that this tradition-oriented vocalist dedicates his latest album, New York, to that remarkable metropolis.

“Although I am from California," explains Kaplan, “every time I go to New York City I am always struck by the energy, excitement and exuberance of the place. Everything about it is exciting – the history, the architecture, the people, the culture, the arts. It's the jazz capitol of the world. It's the home of Broadway theatre, Tin Pan Alley, the Brill Building and countless legendary songwriters over the past century. There is so much to do and the atmosphere is so intense. It's the city that never sleeps. It is one of the few cities in the world that has had many, many songs written about it. The difficulty wasn't finding New York-themed songs for this recording, but deciding which ones to sing."

In addition to his career as a concert performer and recording artist, Kaplan also is the founder and executive director of American Songbook Preservation Society, a non-profit organization whose mission statement is: “To preserve our cultural treasure known as the Great American Songbook by presenting this music to the public at home and abroad as Ambassadors of Song."