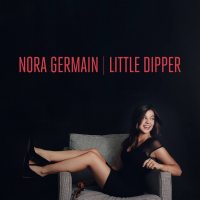 Nora Francesca Germain was born 1991 in Madison, Wisconsin. Now based in Los Angeles with a BA in Jazz Studies from USC Thornton School of Music, she was the first violinist alumna of the Idyllwild Arts Academy. Mentor and collaborator Marshall Hawkins, former bassist for Miles Davis and Shirley Horn, presented Germain with the Inspirational Jazz Student Award at age 17. Introduced to the violin at age 2, she evolved from a family of violinists which included her parents and grandmother; one played in Wisconsin's Madison Symphony.

Her latest recording, Little Dipper, harkens back to the spirited 1920s and '30s, when jazz was cherished through Victrola delights. Her old-school improvisations shine with California sunshine, then break from the melody into an eyes-closed rendering of butterflies, flowing with colorful phrases.

Germain's composition “Swing is Fun," illustrates her underlying sentiment, and she has a joyous time. She covers standards like “How About You" a beloved jazz poem by Burton Lane and Ralph Freed, interpretin the melody in two settings, vocal and violin. Other standards present warm phrasings, as in “Someone to Watch over Me" by George Gershwin and Ira Gershwin, “Little Girl Blue" by Richard Rodgers and Lorenz Hart, for piano and violin, featuring Ed Kornhauser in a special duet. Anyone who knows Billy Strayhorn compositions will appreciate “A Flower is a Lovesome Thing." In addition, Rodgers and Hart's “Thou Swell" brings out the soulfulness of Germain's violin.

Accompanying Germain and adding sugar and spice are drummer Ryan Shaw, bassist Will Pierce and pianist Ed Kornhauser. While there are three original pieces on Little Dipper, Germain contributes the guitar-influenced “Tommy," inspired by Tommy Emmanuel, two-time Grammy nominee, and one of Australia's most respected musicians. Chet Atkins honored Emmanuel with the title “Certified Guitar Player"(CGP) for his contributions to guitar music. Due to Emmanuel's love for music and his delight in sharing it with the world, one audience at a time, one can see Germain's aspiration and passion.

In addition to live performances, Germain works on films, Hallmark and Pixel Channel movies, both on camera and in the recording studio. By age 22, she produced and released three albums, Let It Rip! in 2013 and Generation Gap and Little Dipper in 2014.

Germain doesn't hold back in sharing her vocal and love for jazz and blues violin. She is comfortable playing with The USC Thornton Gala Orchestra, Kristin Chenoweth, Glenn Frey of Eagles, and Barry Manilow.

To gain a greater perspective of her jazz and blues violin one needs to listen to the collaboration “In Your Atmosphere" by John Mayer on YouTube, a performance of soul and spirit.

In August 2014, Germain won the MTV Video Music Awards 2014 with Sam Smith; additionally, she performed as first violinist in a string quartet accompanying Smith at The Forum in Los Angeles playing “Stay with Me" on live TV.

Adding to her achievements, Germain volunteers and ministers in music in LA's Mark Taper-Johnny Mercer Artist Program, as well as playing the Children's Hospital Los Angeles weekly for the patients and their families. She is also a private teacher at the Harmony Project in Los Angeles, a national nonprofit organization providing year-round music lessons and ensemble classes for children. Her gift of giving music and sharing her talents is highly represented in the Inner City Youth Orchestra of Los Angeles (ICYOLA).