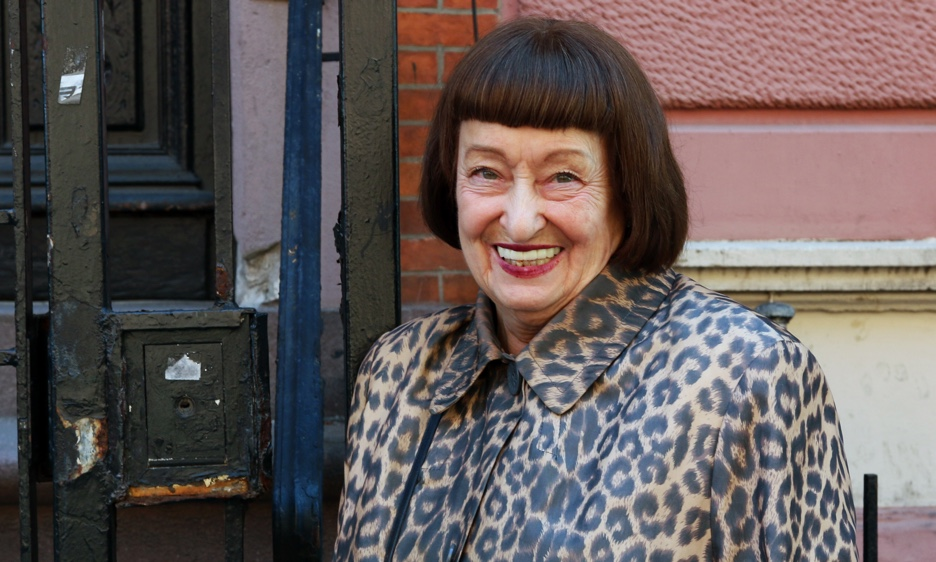 Highlights in Jazz returns to BMCC Tribeca Performing Arts Center for a festive 5 th anniversary concert on Feb. 23, 2023 8 PM. Jack Kleinsinger, the founder and producer of the highly regarded landmark jazz series, has put together an exciting, generation-crossing all-star concert lineup to mark the occasion.

Taking to the BMCC stage on Feb. 23 will be the NEA Jazz Master vocalist Sheila Jordan; guitarists Gene Bertoncini, Russell Malone and Roni Ben-Hur; bassists Jay Leonhart and Harvie S; drummer Danny Gottlieb; pianist Dylan Meek; and tenor saxophonist Steven Frieder. In keeping with the long-running HIJ tradition, keep an ear out for surprise special guests! This milestone event has been a long-time coming, due to delays linked to the covid-19 pandemic. “I was sure I’d celebrate this anniversary, though I wasn’t sure it would happen in 2023,” says producer Kleinsinger. “I was determined to do a 50 th concert somehow. And here I am, at it again,” he notes with a laugh.

The Highlights in Jazz series has been popular with audiences and musicians since its inception in the early 1970s, with many returning over the years for repeat performances. The 2023 event is no exception. “I must be there,” declared Sheila Jordan, as soon as she heard the golden anniversary concert was in the works. It will be a return HIJ appearance for the renowned NEA Jazz Master, who sang at the last HIJ concert, March 22, 2022. “Sheila lives by Sheila’s laws, she blows my mind,” declares fellow musician Art Baron. He should know: Not only did the two appear together at the 2022 HIJ concert, they have known each other since the 1980s, playing together with Roswell Rudd, George Gruntz, and others. The nonagenarian singer (Sheila was born Nov. 18, 1928) is bebop to the bone, citing Charlie Parker as her first great influence, but she is comfortable expressing herself in any musical setting. “You gotta stay that way, baby—it’s jazz, whatever the style, you take it in stride,” she points out.

Sheila studied with Lennie Tristano in the early 1950s, and counts among her early recordings “The Outer View,” with the renowned jazz polymath George Russell. Check out her contributions to albums from Carla Bley, Steve Kuhn, Bob Moses, Lee Konitz, Jane Bunnett, the Royal Bopsters and more. A pioneer of vocal-bass duos, Sheila has often collaborated with Harvie S, who also appears on the 2023 Highlights in Jazz lineup.

Jack Kleinsinger recalls that bassist Harvie S played at Highlights in Jazz events at the start of his long and distinguished career. Since those early days, the ever-in-demand Mr. S has toured as a U.S. Jazz Ambassador and appeared on countless recordings across a gamut of styles. Just a few examples of his bass clef expertise include releases with Joe Lovano, Pat Metheny, the Manhattan Transfer, Chico O’Farrill, Maria Schneider, James Moody, Chet Baker, Anat Cohen, Chick Corea, Tony Bennett, Kenny Barron and Yusef Lateef. And don’t overlook the fine work Mr. S has done as leader or co-leader: In 2022 alone, Harvie released Live at Mezzrow, a duo with Sheila Jordan (their 10 th album); Wondering, with Roni Ben-Hur and Sylvia Cuenca; and You’ve Been Warned, with Roberta Piket and Billy Mintz.

Drummer Danny Gottlieb is another player who cut his teeth performing at Kleinsinger- produced events in the 1970s. He was also instrumental in bringing the Highlights in Jazz archives to the University of North Florida (https://digitalcommons.unf.edu/kleinsinger/), comprising thousands of pieces of memorabilia and hundreds of hours of concert and interview recordings. Perhaps best known as the drummer with the original Pat Metheny Group, Danny has played on more than 300 albums, which landed numerous Grammys. Gil Evans, Bobby McFerrin, Wayne Shorter, Herbie Hancock, David Byrne, Sting, Clark Terry, Mike Stern and Dr. John are just a few of the icons with whom he’s shared stages and studios. Danny has also been recognized as an educator (University of North Florida) and author (The Evolution of Jazz Drumming).

This year marks a break in Highlights in Jazz tradition, according to Jack Kleinsinger. “Since the start, we saluted a living jazz artist every year. I believe in doing it while they’re alive and it means something, that’s part of our tradition. Lionel Hampton was the first living legend we saluted and it became an annual tradition.” There won’t be a living legend concert this time around because of 2023’s abbreviated schedule. However, two previous living legend honorees are part of the 50 th anniversary lineup: Both bassist Jay Leonhart and guitarist Russell Malone have been feted at past events saluting living legends of jazz.

If there were an award for musician who has most frequently graced the Highlights in Jazz stage, Jay Leonhart would have no competition. Kleinsinger estimates that Jay has appeared in well over 30 HIJ events. “Jay is so flexible: He plays bass, he’s a singer, a song writer, he’s even written as tune about me,” the producer points out with a laugh. In that song, the versatile Mr. Leonhart anoints Kleinsinger as “half Mahatma Gandhi and half Jerry Springer.”

Jay himself has been dubbed “the Fred Astaire of jazz” by the L.A. Times’ Don Heckman. The noted critic described Jay as “a craftsman so seamlessly smooth that casual observers often fail to grasp the immensity of his talent.” Jay has kept good musical company over the years, having performed with Duke Ellington, Peggy Lee, Mel Tormé, Jim Hall, Buddy Rich and Roy Eldridge, among other icons. The bassist is also recognized for his singing, composing, and witty lyrics. Though one of Jay’s best-known tunes is called “It’s Impossible to Sing and Play the Bass,” he does both with great skill, much to the delight of his audiences.

Six-string master Russell Malone, another Highlights in Jazz mainstay and living legend honoree, credits Wes Montgomery and George Benson as early influences. However, he has such a distinctive style you’d never mistake him for anyone but himself. With more than a dozen albums as a leader, Russell has more than shown he knows his way around standards and originals. Critics have called him “the gifted torch-bearer” of jazz guitar, and cited him for as an exemplary player of “irrepressible charisma” and “underrated artistry.” Russell has enjoyed long associations with musicians as varied as Jimmy Smith, Harry Connick Jr., and Diana Krall, appearing on three of her Grammy-nominated albums. This versatile guitarist has frequently collaborated with pianist Benny Green, and shared stages and/or studios with Roy Hargrove, Dianne Reeves, Kenny Barron, Mulgrew Miller, Jack McDuff, Ron Carter, Sonny Rollins, and more than one Marsalis brother.

Gene Bertoncini is “the first musician I ever brought onstage,” Kleinsinger recalls. “Bucky Pizzarelli was booked for the original Highlights in Jazz event in 1973. Bucky couldn’t make the first set—he was tied up taping the Tonight Show—so he sent Gene as a sub.” Gene and Jack clearly hit it off, as the guitarist has appeared at numerous Kleinsinger-produced events.

Sometimes referred to as “the Segovia of jazz,” Gene’s concerts and recordings are regularly spotted on the top 10 lists of publications from the Washington Post to Jazziz magazine. The New Yorker magazine too has sung his praises. Versatile enough to play with the Tonight Show band and the Metropolitan Opera orchestra, Gene’s jazz credentials comprise collaborations with the likes of Benny Goodman, Buddy Rich, Wayne Shorter, Hubert Laws, Paul Desmond, Tony Bennett, Lena Horne, and Nancy Wilson.

Rounding out HIJ’s 50 th anniversary concert’s line up of guitarists is Roni Ben-Hur. Early on, he admired the styles of a variety of six-string mavens such as Wes Montgomery, Grant Green, Jim Hall and Kenny Burrell. Roni is known for his flair in playing both straight-ahead jazz as well as Brazilian music. Listeners have discovered that he’s equally comfortable performing with legends of both genres, such as his early mentor Barry Harris, Frank Wess, Duduka da Fonseca

and Leny Andrade, and for his skill in interpreting the music of Baden Powell or Billy Strayhorn and a genre-crossing host of others.

In keeping with the Highlights in Jazz tradition of cross-generational collaboration, the golden anniversary lineup includes pianist Dylan Meek and tenor saxophonist Steve Frieder. A New School graduate, Dylan is comfortable in any musical setting, from stride to hip-hop to jazz to funk to country. He has performed with the Duke Ellington Orchestra, Post Malone, David Amram, the Grant AME Gospel Choir, Victor Jones, Alex Blake and scores of others.

Also a New School grad, Steve has made himself at home at a variety of venues, from Birdland to the Bern Jazz Festival to the 2021 World Series. Besides leading his own quintet, his credits include stints with Milo Z, Joe Lovano, Bria Skonberg, Jerome Jennings, Alvester Garnett, Billy Mintz and more.

Kleinsinger is a hand-on producer and has conceptualized the February 23 concert in four parts, mixing and matching the artists, with veterans and relative newbies sharing the stage in multiple configurations. Keep an eye out for unadvertised special guests, another HIJ tradition. Kleinsinger has always made a practice of welcoming artists to sit in. He’s not anticipating any musicians unexpectedly showing up to participate. “There will be surprises for the audience, but not for me this time. It could happen but it’s not expected,” he says.

“This may be the last concert I ever do,” muses producer Kleinsinger. “It’s bittersweet, because there have been so many losses to covid. I’m ready to pack it in. I’m doing one concert, I’m not ready to do a whole season, that’s a lot of work.” With that said, Jack goes on to talk about the possibility of producing future events, everywhere from jazz international festivals looking to honor the long-running HIJ series to local libraries, spreading the word about jazz. “I like putting together the all-star groups. I like doing the talking as MC,” he admits. “I’m a ham!”

Whether the Highlights in Jazz 50 th anniversary is Jack’s last hurrah or the start of a new chapter (perhaps standup comedy or a one-man show based on his life experiences?), count on Kleinsinger to continue supporting the music and the musicians so dear to him. All lineups are subject to change without notice.

Tickets can be purchased in advance at the box office and by mail order.