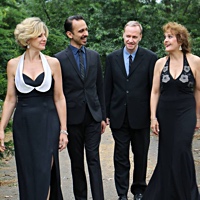 slideshow
Check out this fabulous, ever-so-hip, New York-based jazz vocalese quartet as they kick off their summer 2017 European tour with a first-time appearance in London! The Royal Bopsters play PizzaExpress Jazz Club (10 Dean Street, Soho) on July 3 at 8:30 PM. Doors open at 7:00, and tickets are £20. For tickets, visit pizzaexpresslive.com.

The Royal Bopsters are: Amy London, known and loved in New York City jazz and Broadway circles for her effortless sound, impeccable musicianship and depth of emotion; Holli Ross, “a top-tier jazz vocalist” (All About Jazz) and published ASCAP lyricist whose songs have been recorded by Janis Seigel with the Count Basie Orchestra, Mark Murphy, and Meredith d'Ambrosio; Pete McGuinness, a multi- Grammy nominee for jazz arranging as well as a highly regarded trombonist and singer; and Dylan Pramuk, a remarkable vocalist, improviser, arranger and educator who has performed at many of NYC’s finest jazz venues, including The Blue Note, Zinc Bar, Joe's Pub and Birdland.

The band’s critically acclaimed CD The Royal Bopsters Project made numerous lists of best albums of 2015, including Downbeat Magazine and JazzTimes.

“Extraordinary… The Royal Bopsters Project CD vividly makes the case for a revival of the art of Vocalese. (4.5 stars/Best Albums of 2015)" —Allen Morrison, Downbeat.

“[The Bopsters] are up there with the best, individually and as a group.”—Peter Jones, London Jazz News.

With singers ranging from age 33 to 93, The Royal Bopsters Project is a multi-generational vocal summit on which the talents of singers London, Meader, Pramuk and Ross unite in harmony to pay tribute to the art of vocalese singing and to the forefathers and mothers of their favoured art form. This homage features five vocalese pioneers, each of whom helped to invent the bop- vocal or ‘vocalese’ art form. Six-time Grammy nominee Mark Murphy (1932–2015), considered one of the most influential vocalists in jazz, appears on four tracks, including an outstanding new version of Freddie Hubbard’s “Red Clay,” a song which stands very tall among Murphy’s many breakthrough recordings. Four of the ‘Bopsters’— NEA Jazz Masters and Grammy Award- winners Jon Hendricks (b. 1921) and Annie Ross (b.1930) who represent two thirds of the pioneering vocalese group Lambert, Hendricks & Ross; NEA Jazz Master Sheila Jordan (b.1928); and Arkansas Hall of Famer and Schoolhouse Rock mastermind Bob Dorough (b. 1923) have one feature track on this recording.

Four years in the making, The Royal Bopsters Project was initially conceived by producer/vocalist/arranger Amy London as a twilight years feature for her musical hero and close friend Mark Murphy, who she cites as a key influence (as do scores of other successful jazz singers). One by one, the other ‘Royal Bopsters’ signed on for the project at London’s behest. “I can’t believe my luck to have all of my vocal jazz heroes on this one recording,” says London, a jazz vocal hero herself at this point, having helped to found the prestigious New School Jazz BFA Vocal program, one of the first and most respected such programs in the country, out of which many top young vocalists have emerged. “I wanted to honour these elders and bring their music to a new generation who may not be aware of their importance to this music.”