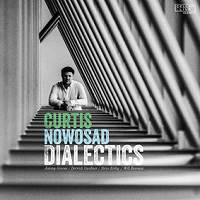 Winnipeg-raised, New York-based jazz drummer, composer and bandleader Curtis Nowosad presents his sophomore album Dialectics, a collection of dynamic and swinging original compositions by Nowosad, as well as selected interpretations of music by Thelonious Monk, Wayne Shorter, and Mercer/Schertzinger. Dialectics is Nowosad’s debut recording on the renowned Canadian jazz label Cellar Live and will be released on March 17, 2015. The album release will be celebrated with a series of concerts and touring activities, starting with a Canadian launch event at the West End Cultural Centre in Winnipeg, Manitoba on March 20, 2015.

Dialectics features Curtis Nowosad on drums, the world-renowned tenor saxophonist Jimmy Greene, Canadian pianist Will Bonness, and Canadian-based, New York expatriates, bassist Steven Kirby and trumpeter Derrick Gardner. The album was produced by Nowosad and recorded at Musirex Studios in Winnipeg, Manitoba. Earlier this year, it was featured as one of “Fourteen jazz cds to look forward to in early 2015” by Peter Hum of The Ottawa Citizen.

The album, which explores the power of language and the pursuit of truth, is a follow-up to Curtis Nowosad’s 2012 debut independent recording, The Skeptic & the Cynic, a showcase of his original compositions and inventive arrangements that put a unique stamp on a variety of contemporary-popular music hit songs. It was critically acclaimed, and rose to the #1 position on the !earshot Canadian national jazz chart. Nowosad toured across Canada in support of the album, including performances at The Montreal International Jazz Festival, Ottawa International Jazz Festival, Winnipeg Jazz Festival and more.

In 2013, Curtis Nowosad relocated to New York as a graduate student and Fellow of the Jazz Institute at Manhattan School of Music. Before this move, he was recognized as one of the faces of the new generation of jazz players in Canada. He received several awards and scholarships such as the Keep an Eye Jazz Award at the Bimhuis in Amsterdam; twice selected to participate in the Betty Carter’s Jazz Ahead Residency at the Kennedy Center in Washington, DC, attended the Banff International Workshop in Jazz and Creative Music at the Banff Centre in Banff, Alberta, and plays in various ensembles including the Grammy-nominated MSM (Manhattan School of Music) Afro-Cuban Jazz Orchestra under the direction of Bobby Sanabria, and has recorded and performed with a variety of world-class jazz musicians.

Dialectics will be released internationally on compact disc and digitally on the Cellar Live label on March 17, 2105. The Canadian launch event will take place on March 20, 2015 at the West End Cultural Centre in Winnipeg, Manitoba, featuring Curtis Nowosad on drums, Jon Gordon on alto saxophone, Derrick Gardner on trumpet, bassist Steve Kirby, and Will Bonness on piano.

We acknowledge the financial support of the Government of Canada through the Department of Canadian Heritage (Canada Music Fund) and of Canada's Private Radio Broadcasters.

Produced with the participation of Manitoba Film and Music.