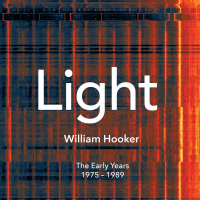 NoBusiness Records is pleased to announce a new archive release from it’s series of important musicians and group recordings from the 70s and 80s, which either were never released before or released on small private labels but long out of print and now newly remastered.

This release is dedicated to William Hooker’s early music and covers his most important works during the period from 1975 to 1989. Newly remastered material is now presented in a 4 CD boxed set.

William Hooker is an artistic whole, a vast circle of vision and execution. A body of uninterrupted work beginning in the mid-seventies defines him as one of the most important composers and players in jazz. As bandleader, Hooker has fielded ensembles in an incredibly diverse array of configurations. Each collaboration has brought a serious investigation of his compositional agenda and the science of the modern drum kit. As a player, Hooker has long been known for the persuasive power of his relationship with his instrument. His work is frequently grounded in a narrative context. Whether set against a silent film or anchored by a poetic theme, Hooker brings dramatic tension and human warmth to avant- garde jazz. His ability to find fertile ground for moving music in a variety of settings that obliterate genre distinctions offers a much-needed statement of social optimism in the arts. A disciplined, adaptive, and energetic approach to his medium insures that the oeuvre of William Hooker will continue to grow thicker and richer.

Released in 1977, but assembled from live dates in 75 and 76, Is Eternal Life, was the first of many fruits of William Hooker’s activism. A double LP [heard here as Disc One], it was a brash assault on the smugness of the gatekeepers. It features the earliest recorded work of two of our era’s defining tenor players: David Murray and David S. Ware.

The essential qualities of Hooker’s drum language and unique approach to band leadership are heard here in their fullness. Any vestiges of beats or swing are swallowed by a smearing constancy; super fast rolls are stacked and interleaved holograpically with crashes and high hat chatter to fashion structures that are functionally more tonal than temporal. These spaces and platforms are the sonic basis for the improvisations of whomever William has brought onstage with him. These other voices – in this case Hasaan Dawkins, Mark Miller, and Les Goodson, in addition to David Murray and David S. Ware – are contained by this idiosyncratic approach to drum sound, even as they are supported and informed by it.

The second disc in this set expands the documentation of Hooker’s sophomore album, Brighter Lights, originally released in 1982. Like Is Eternal Life, this record was pressed on Hooker’s 501C-3 record label Reality Unit Concepts. Brighter Lights features Alan Braufman on alto sax and flute and pianist Mark Hennen, who William still works with frequently. In this set of duets, we can hear how Hooker’s vigorous embrace of the kit provides a compelling canvas for soloists and draws his accompanists into territory that exceeds any contrived expressionisms of free jazz clichés. In addition to the sides that made up the original LP, the second disc contains a stellar performance with Dawkins and altoist Jemeel Moondoc.

The third disc in this set features takes from a 1988 live date at Roulette. With the late Roy Campbell on trumpet and the under-recorded Booker T. Williams, Jr. on tenor, the three tracks on Disc Three provide excellent examples of William Hooker as a composer keenly aware of the complex interactions between instrumentalists and between their lines and his drumming. Campbell was a virtuosic colorist whose sense of humor and depth meshed well with Hooker’s long form constructions. Williams digs into the spaces implied by Hooker’s busy patterns to build melodic extensions that bring an almost vocal-like quality to the work.

Closing out this set, the fourth disc was recorded in 1989 and also features a trio—William with saxophonist Richard Keene and trumpeter Lewis Barnes—and marks one of the last sessions where Hooker will be identified exclusively with the jazz improvisation scene. By the early 90s he has begun side projects with a host of rock/punk guitarists, although his style never fundamentally changed in pursuit of these novel collaborations. Barnes and Keene are well equipped to populate the architecture that Hooker erects. His power-packed, swing-free drumming and Salvador Dali- inspired brushwork can be heard as incentives for longer, perhaps more deliberate phrasing on the part of the tonal improvisers. Keene and Barnes work together as a unit, a pair of interconnected engines churning out light and shadow, harmony and tension, in equal measure. The fourth disc is an extended solo performance called “Continuity of Unfoldment”. This work is a rare opportunity to hear this very lyrical drummer/percussionist without support or augmentation. Listening here is like watching time-lapse video of a Buddhist sandpainting and may provide the high point of this very well- assembled collection.