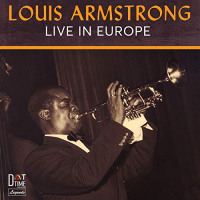 slideshow
It may be too easy to take Louis Armstrong for granted. After all, he is one of the greatest musicians of the Twentieth Century. Perhaps we all conclude that we understand why. Then, along comes yet another reminder of the intensity, the sheer strength, of his musicianship. The most recent reissue to remind us of his inimitable energy and creativity is the Dot Time release Louis Armstrong Live In Europe. It’s not just his astonishing trumpet playing that can drive home the point. It’s also Armstrong’s leadership in directing the creative energies of some of the most gifted artists alive. In his sleeve notes, historian and Armstrong expert Ricky Riccardi quotes British trumpeter Humphrey Lyttleton as confessing to “quaking in his boots” at the ferocity with which Armstrong led the band. Lyttleton said, “If Big Sid Catlett’s drums started to intrude too heavily upon a solo, Louis would turn to him and hiss at him like a snake. And more than once Earl Hines’s exuberance was curbed by a sharp, ‘Cut it, boy.'” With Catlett, pianist Hines, trombonist Jack Teagarden, clarinetist Barney Bigard and bassist Arvell Shaw, Armstrong ran a tight ship while also delivering solos to make you understand Lyttleton’s “quaking.” What trumpet player wouldn’t quake when Pops was so powerful well into his forties?

The first nine performances on this album were recorded in Nice, France in February of 1948. Seven others come from concerts in Berlin, Germany, in the fall of 1952. The Berlin tracks have Arvell Shaw again, along with Trummy Young on trombone, Marty Napolean, piano; Bob McCracken, clarinet; Cozy Cole, drums. Throughout, we find Armstrong driving hard, in superb company and high spirits