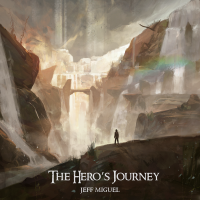 slideshow
The Hero’s Journey is Jeff Miguel’s second album as leader and quite an evolution from the 2015 release Perseverance. The Hero’s Journey was designed to be a heavily produced jazz crossover album where every note has a distinct purpose. The short songs are meant to be listened to in order and feature various saxophones as well as flute. “It Will Be Okay” and “Guilty Pleasures” were released as singles prior to the full album release.

Jeff Miguel is a saxophonist that currently teaches and performs in the Denver metro area. He received his Master of Arts Degree in Music – Emphasis in Jazz Studies from the University of Iowa and won the 2016 Downbeat Graduate Student Music Award for Best Blues/Pop/Rock Soloist. All About Jazz describes him as an “expressive” saxophonist, “like a seasoned veteran poised to establish himself as musician of note.”

In May of 2015, Miguel released, as a leader, his “auspicious debut” (Midwest Record), Perseverance. The album features all original compositions of a variety of styles and influences. Miguel has taken an approach in composition and arranging that “focuses on melody and sophisticated chord progressions to express himself” (Little Village Magazine).

Miguel is an active performer on the Colorado music scene. He plays in several groups of various genres, and performs across the state for public and private events.

Originally from northern Illinois, Jeff studied Biology as an undergraduate at the University of Illinois, undertook research at the Smithsonian Environmental Research Center, and spent several months studying in the Galapagos Islands. After a gap year serving in Americorps, he decided to follow his passion by returning to school to study music. He now works full-time in music as a performer and educator.

Miguel teaches students of all ages and abilities, and specializes in woodwinds, jazz improvisation, and theory. Some of his past students have gone on to win prestigious soloist awards, achieve top seats in classical and jazz all-state festivals, and attend well respected universities for musical studies. In the past, he also co-directed the University of Iowa Hawkeye Big Band and taught Introduction to Jazz Improvisation at the University of Iowa.

Jeff Miguel Music · It Will Be Okay