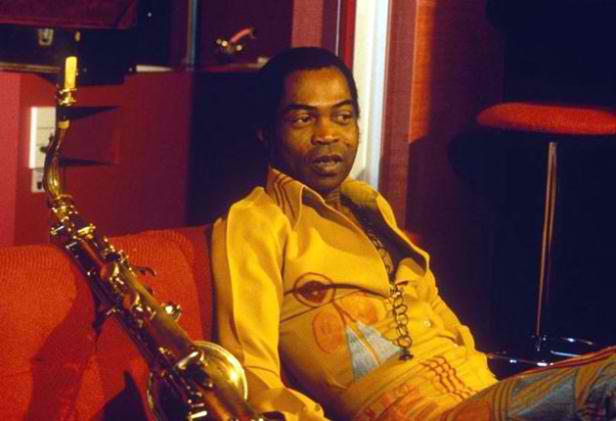 FIRST RELEASE TO BE THE BEST OF THE BLACK PRESIDENT WITH EXCLUSIVE DVD ON OCTOBER 27, 2009

Knitting Factory Records is very excited to announce that over the next 18 months, all 45 Fela titles will be remastered and re-released in unique digi-packs with the original artwork. This reissue series will mark the first time all of the titles will be released on vinyl in North America, and also the first official release of the entire catalog of Fela's 1960s highlife band Koola Lobitos. The first release of the series will be The Best Of The Black President on October 27, 2009, which compiles 13 of the most popular Fela compositions. The deluxe edition of the CD will come with a DVD featuring segments from the film Music is the Weapon, performances from the Berlin Jazz Festival, “Teacher Don't Teach Me Nonsense" from the Glastonbury Festival and interviews with choreographer/director Bill T. Jones and Fela biographer Carlos Moore.

Tony Award-winner Bill T. Jones is the director and choreographer of the new Broadway musical, FELA!, based on the life and music of the legend. The critically acclaimed musical will open at the Eugen O'Neill Theatre in New York on November 23. Sold-out crowds were left dancing in the aisles during its premiere last summer at Off-Broadway 37 Arts, as the world renowned Antibalas and other members of the NYC Afrobeat community, under the direction of Aaron Johnson, performed Fela's music live onstage.

“The timing couldn't be more perfect," says Knitting Factory Records' Ian Wheeler. “With the play opening, it made the most sense to start the reissue series in the fall. We are taking great care working with Fela's estate to make the reissue series the most true to the artist's original concepts than ever before. We have a lot of fun ideas up our sleeves too."

Fela Anikulapo-Kuti, previously Ransome-Kuti, was born in Abeokuta, Nigeria, in 1938. His father, like his grandfather, was a minister of the Protestant church, and director of the local grammar school. His mother was a teacher, but later became a politician of some considerable influence. His parents sent him to London in 1958, but rather than study medicine like his two brothers and his sister, Fela chose to register at the Trinity School of Music, where he was to spend the next five years. He formed Koola Lobitos with other Nigerian musicians living in London.

Fela decided to take the Koola Lobitos to the United States in the mid 60s. In Los Angeles, he changed the name of the group to Fela Ransome-Kuti And Nigeria 70. At the club where they were playing, he met an African American girl, Sandra Isodore, who was a close friend to the Black Panthers. She introduced Fela to the philosophies and writings of Malcolm X, Eldridge Cleaver and other Black activists and thinkers, through which he was to become aware of the link existing between Black people all over the world. While in Los Angeles, Fela also found the inspiration he was seeking to create his own unique style of music, which he named Afro-Beat. Before leaving America, the band recorded songs in this new style. When he returned to Nigeria, Fela once again changed the name of the group, this time to Fela Ransome-Kuti & Africa 70.

Fela soon became a virulent critic of colonialism and neo-colonialism soon grew famous as a spokesman for the great mass of people, in Nigeria and elsewhere in Africa and the African Diaspora, disenchanted with the period of post-independence. His songs became satirical and sarcastic towards those in power, condemning both military and civilian regimes for their crimes of mismanagement, incompetence, theft, corruption and marginalization of the underprivileged.

In 1974, pursuing his dream of an alternative society, he built a fence around his house and declared it to be an independent state: The Kalakuta Republic. To the chagrin of the bourgeois section of the Nigerian society, this act of defiance was soon to spread throughout the entire neighborhood as more and more people were inspired by Fela's stance. The authorities remained vigilant, fearing the potential power of his “state within a state." On countless occasions, he was to suffer the consequences of his scathing denunciations with arrests, imprisonment and beatings at the hands of the authorities.

Fela presented himself as a presidential candidate in the 1979 elections that would return the country to civilian rule. His candidature was refused. Four years later, at the next elections, Fela once more stood for president, but was prevented from campaigning by the police, who again rampaged through his house, imprisoning and beating Fela and many of his followers. However, any further presidential aspirations were crushed when a coup brought Nigeria back to military rule.

In 1984, Fela served 20 months of a five-year prison sentence on trumped-up currency charges. He was only released when the judge confessed to having sentenced him with such severity because of pressure from the previous regime. The judge was dismissed from office and Fela was given his liberty.

Over the next decade, with an entourage of up to 80 people, now called Egypt 80, Fela made several visits to Europe and the United States. These tours were to receive tremendous public and critical acclaim, and made an important contribution to the worldwide popular acceptance of African rhythms and African culture.