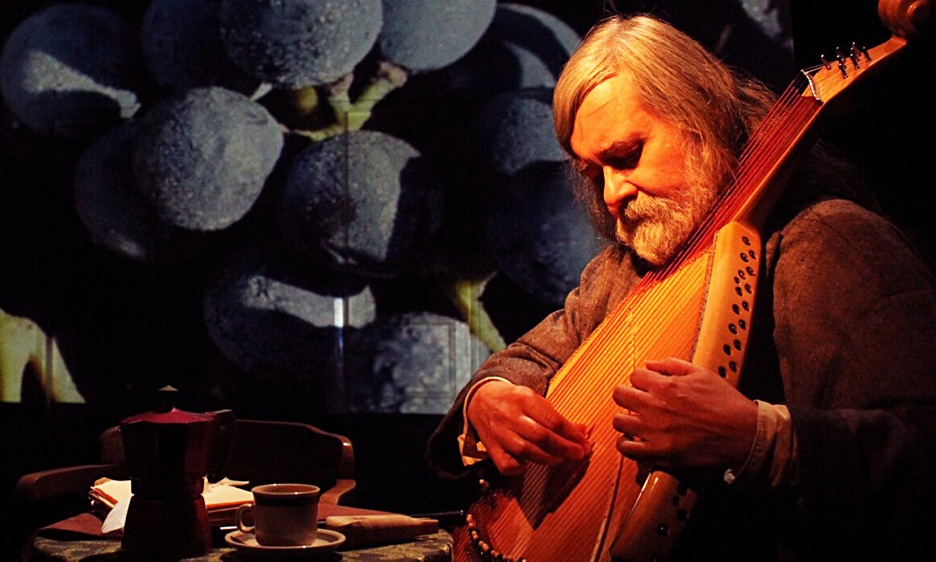 New England Conservatory’s Contemporary Improvisation students, faculty, and special guest, Ukrainian-American folk musician, improviser, and composer Julian Kytasty, present Ritual, a concert exploring the myriad of ways that ritual manifests in our lives and music. Curated by faculty member Anthony Coleman, the program includes performances centered in Jewish, African, Ukrainian, Korean, and American folk tradition as well as new student works engaging with contemporary rituals of modern life, from the dance hall to the doctor’s office. International broadcast of the concert (performed on May 4) is set for Saturday, June 4. For information and link visit https://necmusic.edu/events/ci-department-concert-ritual

Julian Kytasty is one of the world’s premier players of the bandura (Ukrainian lute-harp), and the instrument’s leading North American exponent. A singer, multi- instrumentalist and third-generation bandurist, he has concertized and taught instrumental and choral music throughout the Americas and Europe, and is especially recognized for his expertise in epic songs and early bandura repertoire. Born in Detroit, he has a BFA in Theory and Composition from Concordia University in Montreal. In 1989-1990 Kytasty was one of the first North American-born bandurists to tour Ukraine, performing over one hundred concerts. He has often returned to tour in Ukraine and in the summer of 2014 he traveled to sites associated with Taras Shevchenko’s life and poetry at the invitation of the Ministry of Culture of Ukraine’s Shevchenko Bicentennial Project. As a performer, recording artist, composer, and bandleader, he has redefined the possibilities of the bandura. Mr. Kytasty is the Musical Director of New York Bandura and founder of Bandura Downtown, an innovative music series based in New York’s East Village that provides a home for creative explorations of traditional and contemporary sounds and themes. He has recorded and performed as a soloist, with the Canadian world music group Paris to Kyiv. He has also worked with musical innovators such as John Zorn and Derek Bailey, as well as cross-culturally with such artists as Wu Man, Klezmer revivalist Michael Alpert, and Mongolian master musician Battuvshin. These experiences have shaped his approach to composition as designing a musical space in which each individual voice and instrument can find room and inspiration to make its unique contribution.

Anthony Coleman has been a key figure in jazz and creative music for decades, making a particular mark on the New York scene along with artists like John Zorn and Elliott Sharp. Known for his creativity, innovation, and virtuosity, his work spans a range of genres including free improvisation, jazz, Jewish music, and contemporary chamber music. Coleman’s musical odyssey has taken him through many cultures and led him to wear many hats as composer, improvising keyboardist, and teacher. Coleman joined the NEC faculty in 2006, returning to a school where he himself studied in the 1970s, during the birth of NEC’s Contemporary Improvisation program (then called Third Stream). Coleman’s work has been commissioned and/or performed by clarinetist David Krakauer, Meet The Composer, Bang on a Can All-Stars, Associazione Alessandro Scarlatti, the Brecht Forum, Merkin Concert Hall, String Orchestra of Brooklyn, and many others. He has presented his work at the Sarajevo Jazz Festival, North Sea Jazz Festival, Saalfelden Festival, and the Krakow and Vienna Jewish Culture Festivals, and been awarded grants from New York Foundation on the Arts, New York State Council on the Arts, and Meet the Composer. He has recorded 20 CDs under his own name, and has played on more than 100 CDs including The End of Summer (Tzadik), which features his NEC Ensemble Survivors Breakfast.