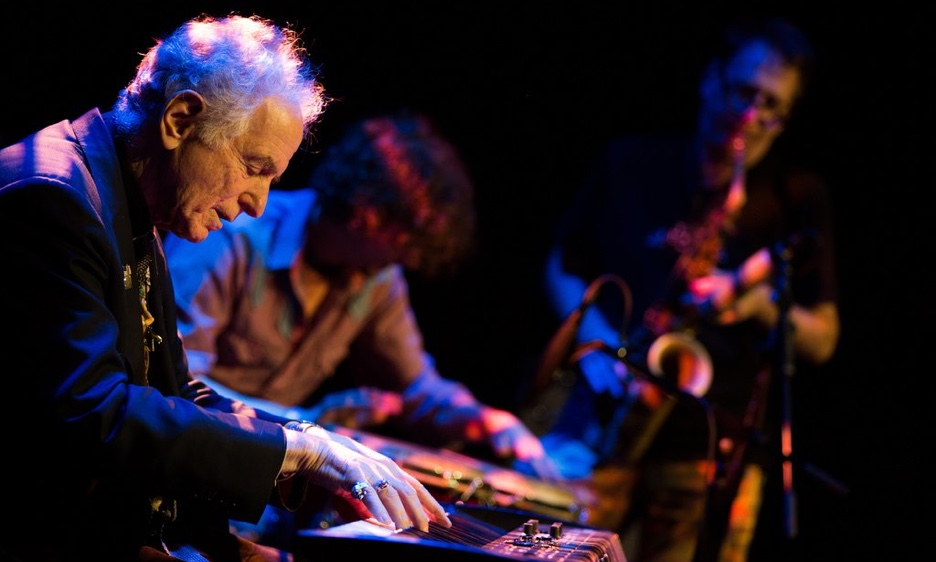 New England Conservatory President Andrea Kalyn and the Board of Trustees announce multiple Grammy Award-winning singer-songwriter James Taylor as the commencement speaker and honorary degree recipient at the Conservatory’s 151st annual commencement exercises, which will be held in-person on Sunday, May 22, 2022 at 2:00 p.m.

The ceremonies will take place in historic Jordan Hall and will be streamed on NEC’s website (necmusic.edu). NEC will bestow honorary Doctor of Music (hon. D.M.) degrees on: James Taylor, who will deliver his commencement address at Jordan Hall, as well as David Amram, noted conductor and composer, and Ella Jenkins, regarded as the “First Lady of Children’s Music.” Pianist Emanuel Ax, who received an honorary degree from NEC in 2021, will extend an online greeting at this year’s commencement.

The ceremony also will include a special message from by Ukrainian cellist Denys Karachevtsev, who captured the world’s attention when he played Bach’s Cello Suite No. 5 outside the bombed out remains of the regional police headquarters in the city of Kharkiv in March 2022. For more on Karachevtsev, please visit Washington Post and Reuters.

“Commencement this year has taken on a whole new level of reflection for us, and I cannot think of better examples of the impact that musicians and our graduates can have in the world than our honorary guests.” says President Kalyn. “We’re thrilled to welcome James Taylor – a Boston-native – into the NEC community of artists. James is a pioneer who defined a movement in musical history, and exemplifies the innovative spirit that we seek to instill in our students. We’re also honored to share Denys Karachevtsev’s message from Kharkiv, Ukraine in a moment of solidarity and an example of how music advances humanity. Despite what is happening in his country, Denys is using his music to connect, inform, and persevere.”

At the 2022 Commencement ceremony, 229 individuals (92 undergraduate and 137 graduate students) will be awarded degrees and diplomas including the Bachelor of Music, Graduate Diploma, Master of Music, Doctor of Musical Arts, and Artist Diploma.

A pre-Commencement in person and streamed concert will showcase NEC students from the graduating classes on Saturday, May 21, 2022 at 7:30 p.m. ET. Further details will be announced on the NEC website in advance of the performance.

Dubbed the “Renaissance Man of American Music,” David Amram started his professional life as a French hornist in the National Symphony Orchestra in Washington, DC, in 1951. After a stint in the U.S. Army, he moved to New York City in 1955 and played French horn in the legendary jazz bands of Charles Mingus, Dizzy Gillespie, Lionel Hampton and Oscar Pettiford.

In 1957, he created and performed in the first ever Jazz/Poetry readings in New York City with novelist Jack Kerouac, a close friend with whom Amram collaborated artistically for more than a dozen years. Since the early 1950s, he has traveled the world extensively, working as a musician and a conductor in more than thirty-five countries including Cuba, Kenya, Egypt, Pakistan, Israel, Latvia and China. He also regularly crisscrosses the United States and Canada.

Appointed by Leonard Bernstein as the first Composer In Residence for the New York Philharmonic in 1966, he is now one of the most performed and influential composers of our time. His most popular recent symphonic compositions include “This Land, Symphonic Variations On A Song By Woody Guthrie,” commissioned by the Guthrie Foundation and performed by the Colorado Symphony with Amram conducting and recorded by Newport Classics in 2015; “Giants of the Night,” commissioned and premiered by flutist Sir James Galway; and, “Kokopeli, A Symphony in Three Movements,” premiered by the Nashville Symphony Orchestra with Amram conducting. He has collaborated as a composer with Elia Kazan, Arthur Miller, Eugene Ormandy, Sir James Galway, Ken Radnofsky, Pinchas Zukerman, Langston Hughes, and Jacques D'Amboise; and as a musician with Thelonious Monk, Dizzy Gillespie, Odetta, Bob Dylan, Willie Nelson, Betty Carter, Floyd Red Crow Westerman, Pete Seeger, Paquito D’Rivera, and Tito Puente.

His archive of professional and personal papers was acquired by the Lincoln Center of the Performing Arts Branch of the New York Public Library. Amram is the author of three memoirs, “Upbeat: Nine Lives of a Musical Cat,” “Offbeat: Collaborating With Kerouac,” and the highly acclaimed “Vibrations.” His fourth book “[email protected]: Notes from a Promising Young Composer” is scheduled to be published in November of 2023, celebrating his 93rd birthday. View David’s full bio here.

Born to an African-American working class family in St. Louis, MO, Jenkins moved to Chicago, where she grew up on the city’s South Side. Her family and neighborhood life provided the basis of her musical education—each move allowed Jenkins to experience the rhythms, rhymes, and games in each new neighborhood, which could be different even if only a few blocks apart. She was fascinated by her Uncle Flood, who played the harmonica, and alongside him she would tease out rhythms on oatmeal boxes, wastebaskets, and cooking pots. “I was naturally rhythmic,” she said, “and would try to copy my uncle’s sounds by whistling. But my mother did not like it, saying good women and young girls did not whistle.” Yet it was her mother who took her to the music store to purchase her first harmonica. Her brother taught her songs he learned at summer camps.

After graduating college in San Francisco, Jenkins returned to Chicago and worked in community centers and for the YWCA where she began to create songs for children. Performing on the streets led to an appearance in 1956 on the early children’s television program, which led to “This is Rhythm,” her own full-segment on the show. Odetta and Big Bill Broonzy made guest appearances. Since then, she has been a self-employed full-time musician, traveling the world to share her music with children and to learn from them their own cultural songs and stories.

Jenkins’ work draws on African-American call and response singing—she cites Cab Calloway as an early influence. Her first recording, “Call and Response,” released in 1957 on Moses Asch’s Folkways Records (now Smithsonian Folkways Recordings) has never been out of print and remains a bestseller. Her discography currently lists 40 releases. In 1990 Jenkins received the Pioneer in Early Television Citation from the National Museum of American History. She is also the recipient of lifetime achievement awards from the American Society of Composers, Authors, and Publishers and the National Academy of Recording Arts and Sciences. In 2009, she received a United States Artists Fellowship, a National Endowment for the Arts National Heritage Fellowship followed in 2017. Jenkins is one of only 12 people to be recognized as a Legacy Honoree of the Smithsonian Center for Folklife & Cultural Heritage.

As a recording and touring artist, James Taylor has touched people with his warm baritone voice and distinctive style of guitar-playing for more than 40 years, while setting a precedent to which countless young musicians have aspired. Over the course of his celebrated songwriting and performing career, Taylor has sold more than 100 million albums, earning gold, platinum, and multi-platinum awards for classics ranging from Sweet Baby James in 1970 to October Road in 2002. In addition to multiple Grammy awards, Taylor has been inducted into both the Rock and Roll Hall of Fame and the prestigious Songwriters Hall of Fame. In 2012, Taylor was awarded the distinguished Chevalier of the Order of Arts and Letters by the French government and the National Medal of Arts by President Barack Obama in a White House ceremony. In November 2015, Taylor was presented with the Presidential Medal of Freedom, the nation's highest civilian

honor. In December 2016 Taylor received the Kennedy Center Honors, which are presented annually to individuals who have enriched American culture by distinguished achievement in the performing arts.

In 2015, Taylor released Before This World, his first new studio album in thirteen years, which earned him his first ever #1 album. Taylor’s latest release American Standard earned him his sixth overall Grammy award for Best Traditional Pop Vocal Album. American Standard infuses new sounds and fresh meaning into these timeless works of art, reimagining some of the most beloved songs of the 20th century and making them completely his own. In 2020, Taylor also released Break Shot, the first-ever Audible Original performance by James Taylor, and a deeply personal and authentic audio-only memoir.

Taylor is touring throughout 2022 and is currently on tour across Canada. He will continue on through the US in the summer, including two sold out shows at Tanglewood, and finish up in Europe this fall.

Founded by Eben Tourjée in Boston, Massachusetts in 1867, the New England Conservatory (NEC) represents a model of music school that combines the best of European tradition with American innovation. This independent conservatory stands at the center of Boston’s rich cultural history and musical life, presenting concerts at the renowned Jordan Hall on Huntington Avenue, recognized as Boston’s Avenue of the Arts. As a not-for-profit institution that educates and trains musicians of all ages, NEC cultivates a diverse, dynamic community, providing music students of more than 40 countries with performance opportunities and high-caliber training from 225 internationally esteemed artist-teachers and scholars. Propelled by profound artistry, bold creativity and deep compassion, NEC seeks to amplify musicians’ impact on advancing our shared humanity, and empowers students to meet today’s changing world head-on, equipped with the tools and confidence to forge multidimensional lives of artistic depth and relevance. NEC pushes the boundaries of music-making and teaching through college-level training in classical, jazz, and contemporary improvisation. Through unique interdisciplinary programs such as Entrepreneurial Musicianship and Community Performances & Partnerships, NEC empowers students to create their own opportunities. As part of NEC’s mission to make lifelong music education available to everyone, the Preparatory School and School of Continuing Education deliver training and performance opportunities for children, pre-college students and adults.