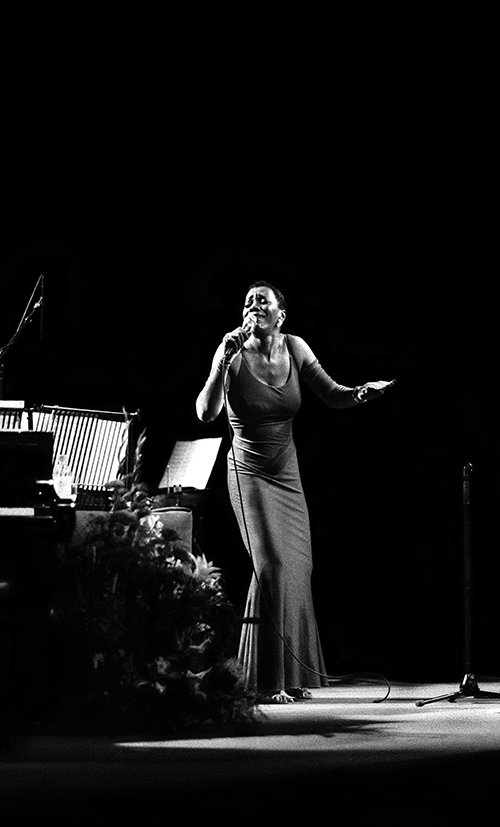 slideshow
Critically-acclaimed vocalist, songwriter, producer and musician Carmen Lundy will be featured in the upcoming biopic documentary about Jazz Great Mary Lou Williams, The Lady Who Swings The Band, directed by filmmaker Carol Bash which premiered at The Pan African Film Festival in Los Angeles February 6th. In addition to speaking on film, Carmen also performs the title track live in the film.

Carmen herself has a long history with the music of Mary Lou Williams. In the early eighties, shortly after Mary Lou’s death, she met Father Peter O’Brien who invited her to perform at a tribute concert at Symphony Space in New York City. He later informed her of The Mary Lou Williams Foundation which was dedicated to children, because of Mary Lou’s desire to instill an interest in Jazz at an early age. It was at this time that Father O’Brien hired Lundy to teach Mary Lou’s Mass For Peace (commissioned in the late 70’s by The Pope) to young children.

Says Carmen, “I chose a dozen or so voices from Our Lady Of Lords Catholic School in Manhattan and we made our first performance with the young Chorus at Fordham University in Manhattan where Father O’Brien was chaplain. We also worked with the New York Boys Choir and performed with one of Mary Lou’s piano students, the late Hilton Ruiz.”

Mary Lou’s Mass was originally titled Mass For Peace until the Alvin Ailey Dance Company debuted the work with the new title Mary Lou’s Mass in the late 70’s. Lundy was also commissioned by Peter O’Brien to write choral arrangements of her works in addition to recording excerpts of the Mass for Smithsonian Folkways. Those arrangements are still being used throughout the world today.

Carmen has participated in numerous concerts of the Mass including performances with great pianists Marian McPartland and Geri Allen in cities across the country at such venues as The National Cathedral in Washington, D.C., Cathedral of St. Paul in Detroit, The Los Angeles Master Chorale at Disney Hall, and with The Cleo Parker Robinson Dance Company in Denver, Colorado.

Recently in 2014, at the Gate House In Harlem, New York, Lundy portrayed Mary Lou Williams through song and monologue in a stage play written by Farah Jasmine Griffin entitled A Conversation With Mary Lou. The play was directed by S. Epatha Merkerson and featured Geri Allen on Piano as Mary Lou, along with Kenny Davis on bass and Kassa Overall on drums. The show played to full houses for three consecutive nights while telling the story of her life spanning seven (7) decades as a professional musician, arranger and composer.

Additionally, Carmen’s latest CD, the acclaimed Soul To Soul, (released this past September) features a stunning version of the Mary Lou Williams track “What’s Your Story, Morning Glory.” A passionate new song cycle and the artist’s 14th CD, Soul To Soul was released to critical raves from publications ranging from Jazz Times to Monsters & Critics to AXS Entertainment to Downbeat. Lundy performed to packed houses in Los Angeles, New York City, London, Paris and more and tracks from the CD have been receiving airplay on stations across the country including such tastemaker stations as Los Angeles’ KCRW and New York’s WBGO. Additionally, Lundy was chosen and interviewed as part of The History Makers, a series celebrating the achievements of African Americans, which will be housed permanently at The Library Of Congress in Washington, D.C.