The music is a soothing antidote to the stresses that many are feeling in today’s world. Heartfelt music can truly lift us up.
—Shambhu 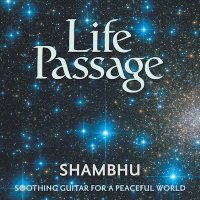 “The music is a soothing antidote to the stresses that many are feeling in today’s world,” Shambhu said. ”Heartfelt music can truly lift us up.”

All About Jazz reviewer Jakob Baekgaard described Shambhu’s sound as “not world music, fusion, finger-style, new age or smooth jazz, but all these things in a personal expression.”

Shambhu recorded “Life Passage" at his Hamptons Sanctuary Studios in Westhampton, NY. The EP was mixed and mastered by Todd Boston at Spatial Sound Studios in Portland, OR.

The five songs on “Life Passage" were written, arranged and produced by Shambhu, except “Shambhu", co-written with his guru, Sri Chinmoy.

Shambhu transforms stillness and silence into calming sounds. He's an acclaimed jazz guitarist and composer who the Marin Independent Journal called “a consummate guitarist". His music has been recommended by Deepak Chopra on CNBC. Shambhu's relaxing music eases the busy minds of listeners.

Shambhu is featured on Equinox (with Premik Russell Tubbs), Whitney Houston's Whitney, Jeff Oster's Next, Ricochet – The Echoes Living Room Concerts (Vol 20), two Will Ackerman compilations, The Gathering II and The Gathering I (ZMR Award for “Best Album of the Year"), “The Guitar—The Best of New Age Reviews", Ann Licater's Doorway to a Dream and Matteo Palmer's Safe Haven.

“Because of You" features Shambhu and the innovative bassist Michael Manring, and pianist Frank Martin in a contemplative new age/jazz fusion. Michael is featured on Shambhu’s debut release, Sacred Love and on his third release, Soothe. He has performed and recorded with New Age music legends, including Will Ackerman, Suzanne Ciani, Michael Hedges and Thomas Dolby.

“Gentle Flower" is a slow dance with love. Shambhu is accompanied by pianist Frank Martin, who has been featured on many of Shambhu’s releases. Frank has performed and recorded with Stevie Wonder, Sting, Whitney Houston, Narada Michael Walden, John McLaughlin, Santana, Bruce Springsteen, Paul Simon, and others.

The title song, “Life Passage" features Shambhu on acoustic guitar reflecting on the passing of the late jazz pianist and composer Chick Corea who Shambhu studied with online during the pandemic and who passed quite unexpectedly.

With “Mars Dawn", you’re on the first journey to Mars, the great Red Planet. The serene sound of Shambhu's guitar is bathed in a lush, orchestral string setting by Nathaniel Wolkstein with a french horn by Premik Russell Tubbs, calling us to an ultimate and unknowable destiny. Nathaniel is a creative violinist and multi-instrumentalist. Premik soars on EWI/French horn. Shambhu and Premik recorded together in the group, “Equinox", which toured the U.S., Europe and Canada. Premik has appeared on multiple Shambhu’s releases. He has performed with Carlos Santana, John McLaughlin, and recorded on dozens of albums produced by Will Ackerman for Masako and others.

The final song, “Shambhu" is an Indian temple-beat fusion based on a melody by Sri Chinmoy. Shambhu plays guitar, e-sitar and e-pads. He’s accompanied by New Zealand world percussionist Nelson Myers-Daly, a member of the meditative music duo, Monk Party, and the multi-talented Premik Russell Tubbs on bansuri flute.