SOURCE: SOMETHING ELSE!
November 18, 2011
Sign in to view read count 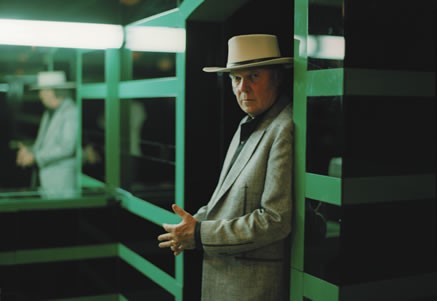 There's just something about Neil Young. His present-day persona along with his musical past form a sort of rolling time capsule in my head. Very strange, much like the man himself.

This particular album, recorded 1971 at Toronto's Massey Hall, showcases Young and his songwriting at an early career peak. Played on acoustic guitar and sometimes piano, Young definitely had that audience in full control. Many of the songs, new at the time, went on to become part of his classic Harvest LP.

But that's getting a little ahead of things.

I have a weird mental association with the song “Heart Of Gold." That song was being played right around the time that I was learning how to play the guitar. In fact, that little opening two-chord riff was the first thing I ever forced my poor little fingers to play. Not so strange, I know, but then there's Angel the Chihuahua. That was my cousin Bobby's dog. I woke up one morning after a sleepover and there's Angel at the foot of the bed. Like most dogs of that breed, Angel was more than a little nervous. Unfortunately, this made Angel shake. A lot. Also, she seemed to let out a continuous growl, complete with raised lip dog-type sneer. So I sit up, Angel launches into the symphony of Mexican dog fear, and my blood runs cold. Of course, it's early in the morning and I've got to pee pretty badly. Great.

I'd like to finish that story, but there are no details at my disposal. If I back up twelve hours though, there's the entire evening spent teaching myself Neil Young's “Heart Of Gold." Back to that morning instant of terror, the last fragment I can recall was thinking that, man, my fingers were sore. That acoustic guitar lived on for nearly another decade, dying a pathetic death against the basement wall one hormone-raged night as the 1970s drew to a close. (Let's just say that I had a temper).

[SOMETHING ELSE! INTERVIEW: Nils Lofgren talks about collaborating with Neil Young&#151as well as key moments from his subsequent stint in the E Street Band, including the devastating loss of Clarence Clemons.]

Now we take a time rocket to the year that The Band's “The Last Waltz" came out. At that point, I'd be willing to wager that I still didn't own any Neil Young records. What opened my eyes was seeing Young sing “Helpless" (with Joni Mitchel on high harmony). My goodness, what the hell was that?! Maybe further investigation is warranted? Yes.

There are a pile more of these anecdotes, from the timeless Rust Never Sleeps (nestled between memories of learning how to drive a stick shift in my sister's Volkswagen and the horror of a family member's alcoholism) to my friend Steve doing a hilarious Neil Young-meets-Johnny Mathis version of “Sugar Mountain," to giggly and drunken listens through the Trans and The Shocking Pinks records to the beautiful singularity of Harvest Moon to the earthy crunch of seeing Greendale performed live, to witnessing the Internet bluster surrounding Living With War.

What I like about Young is his artistic honestly. Folks used to love bashing Trans until they discovered the connection to Young's handicapped son. Say what you want about the music, Young's intent has always been pure.

So all of these years later the Massey Hall record, long a Young fan bootleg, was finally released. It's a fine album. The content of the songs is cranked up quite a bit with this intimate setting. There may be no Crazy Horse sonic heaviness on “Cowgirl In The Sand," but the emotional directness of the setting more than makes up for it. Honestly, this is not a fan-only release.

So there's your rolling time capsule. Maybe the only series of stories involving both a smashed guitar, an alcoholic, and a Chihuahua. It just shows you the power of all music, not just this particular record.