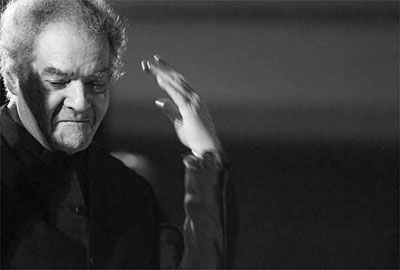 George Russell, author of the Lydian Chromatic Concept of Tonal Organization that under-girded the pioneering modal experiments of John Coltrane and Miles Davis, has died in Boston at age 86. He had been affiliated with New England Conservatory from 1969 when then President Gunther Schuller invited him to return from Europe and teach. At the time of his death, he was Distinguished Artist-in-Residence Emeritus and had been awarded an honorary Doctor of Music in 2005.

“George Russell was a cornerstone of NEC's Jazz Department for 35 years, continuing to teach through 2004," said Jazz Studies Chair Ken Schaphorst '84 M.M. “George inspired generations of NEC students with his unique blend of soul and intellect. Compositions such as 'Cubano Be, Cubano Bop,' 'Ezz-thetic,' and 'All About Rosie' were revolutionary developments in the art of jazz composition, challenging improvisers and listeners to expand their notion of how rhythm, melody, harmony and form may be organized in jazz."

The Conservatory often turned to Russell for special celebrations or festivals. During the Centennial celebrations for NEC's Jordan Hall in 2003, Russell was a featured performer, conducting the NEC Jazz Orchestra in The Best of Jazz concert. In 1992, he was commissioned to write an evening-long work, Time Line, for the Conservatorys 125th Anniversary. Of that “massive collage piece," Hankus Netsky '76, '78 M.M. and Chair of NEC's Contemporary Improvisation Department said, “I think a lot of people were surprised at how diverse his taste in and knowledge of music was. Timeline ranged from Dvorak to klezmer to Ornette Coleman to Glenn Miller to Marvin Gaye to Steely Dan."

A life-long seeker, Russell was still exploring the depths of musical structure in his eighties. In a 2006 All About Jazz interview by Ed Hazell, he commented, “My aim at this point is to understand the language of music in its deepest sense and contribute to it, enrich it...Music is a living thing, a component of the emotional center of all living things. It speaks not only to the emotional center, but also to the intellectual and physical centers. What it has to say must be understood. I want to see in the meanings of music more deeply. I want to know the inner of everything. My music is trying to tell me that so I can tell the world."

“The thing George cared about the most in music was 'essence,'" said Netsky. “He didn't care how complicated your music was or if you sounded hip or square or anywhere in-between. He just wanted to feel like the music he was hearing was your real voice - if he didn't feel that he wasn't interested.

“In George's mind, the Lydian Chromatic Concept was not so much a theoretical system as it was an approach to life. 'It comes from Pythagoras,' he liked to say. 'It's a reflection of nature.' It wasn't in any way a 'jazz' thing, but a way to appreciate the laws of tension and release, a way of understanding Bach, Ravel, and Stravinsky -- and seeing Coltrane, Monk, and Miles Davis as musicians who were part of the same continuum."