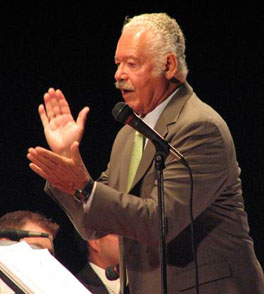 New York, NY -- Candido Camero, Alfredo “Chocolate" Armenteros and Jimmy Bosch will gather with the Latin Jazz All Stars for a special 80th birthday celebration for legendary Latin jazz composer, arranger and saxophonist Ray Santos on Monday, May 18th at Dizzy's Club Coca-Cola at Jazz at Lincoln Center. The ensemble group will perform sizzling Santos compositions such as Sunny Ray, Azulito and 3-D Mambo, set behind the backdrop of Central Park and the Manhattan skyline in honor of one the most important figures in Latin music.

Known as El Maestro of the mambo sound, for the past 50 years Santos has played, recorded, composed and arranged for the premiere orchestras in Latin music including Tito Puente, Tito Rodriguez, Mario Bauza and Machito, to name a few. Santos music captures what he calls the incessant rhythmic drive of the Afro-Cuban sound fused with the power and sonority of Big Band Jazz.

Mr. Santos is widely recognized for composing and arranging music for Grammy Award-winning projects by musical giants including Tito Puente, Eddie Palimeri and Paquito D'Rivera. In 1992, Santos received critical acclaim for his arrangements for The Mambo Kings movie soundtrack, including the Oscar-nominated song, “Beautiful Maria of My Soul." In the same year, Santos collaborated with Linda Ronstadt on Frenesi, a tour-de force production that earned the Grammy Award for Best Tropical Latin Album of the Year. In 1998 he was invited to be a special guest conductor for the Jazz at Lincoln Center Orchestra at the landmark concert Con Alma/Jazz with a Latin Tinge.

A New York native and graduate of The Julliard School, Santos is one of the leading authorities on Afro-Caribbean music and is frequently interviewed on radio, television and film, including Cachao: Uno Ms the upcoming documentary on the life of great Cuban musician Israel Cachao Lopez. He has been an esteemed music educator at the City College of New York for nearly 25 years and is frequently invited to lecture at colleges and universities throughout the U.S. including Dartmouth College, Lehman College, The New England Conservatory of Music and has served as artist-in-residence at the SUNY Purchase College School of the Arts, Conservatory of Music.