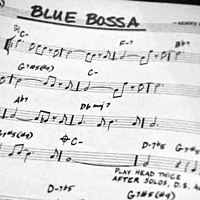 For this week's “Music Education Monday," it's part two of a look at free sheet music resources available online, this week concentrating on fake books.

First, a bit of background: A fake book is a collection of sheet music for well-known tunes, usually formatted with one song per page using only chord symbols, a written-out melody line, and lyrics (if the song has them).

The idea is that with these raw materials, an experienced musician doesn't need a full, written-out arrangement of the tune, but rather can “fake" her way through a spontaneous, improvised version. Since they contain a lot of tunes in a relatively small package, fake books commonly are used by jobbing musicians who have to deal with lots of requests, as in a hotel lounge gig or wedding band, but also can be used just to learn tunes and develop a wider repertoire.

(For more on fake books, Real Books, and where to find them online for free, keep reading after the jump...) The “Real Books" are a specific brand of fake book, the first of which was put together at Berklee in the early 1970s. They were called “Real" because all the arrangements purportedly were based on actual recordings, with the sources indicated in most cases, so that you knew, for example, that the version of “Red Clay" shown in Real Book Vol 1 was from Freddie Hubbard's album, and not Charles Earland's.

Like most of the fake books that came before them, the Real Books also were illegal, violating the copyrights of the composers whose tunes were included. As a result, at first they were spread like samizdat - run off in copy shops or after hours in offices, and transferred hand-to-hand from player to player in music stores, band rooms and similar spots in a more-or-less clandestine manner.

To give you a more specific idea, yr. humble StLJN editor bought his first Real Book ca. 1976 in an under-the-counter transaction at a locally owned music store in Columbia, MO, after being told of its availability by a fellow student. It came not as a bound book, but as a big stack of two-sided, photocopied pages, punched with three holes to fit into a notebook, wrapped in plastic film, and then packaged in the proverbial plain brown paper bag.

Eventually, all the legalities were sorted out, and most fake books that are commercially available today are licensed and legal. (For more on the history of fake books and Real Books, see this article.)

But that doesn't mean they're without controversy, because there's a contingent of musicians and music teachers who are dead set against their use under any circumstances. Without trying to summarize all of their arguments, the main gripes seem to be that fake book versions of tunes can be inaccurate, and that an over-reliance on fake books can discourage actually memorizing songs.

While both of these complaints are true to some extent, I tend to endorse the more moderate view that fake books and Real Books can be helpful in practice and on gigs, but shouldn't necessarily be treated as gospel, especially when it's so easy these days to hear actual recorded versions of most standards and jazz compositions.

With the coming of the Internet, it was inevitable that fake books, like so many other things, would find their way online. More recently, we're also seeing digital versions of fake books, designed to be use on a smart phone or tablet.

The listings below, though, are all for files that can be found online in PDF format. While some of them may appear to violate someone's copyright, others are out of print, out of copyright, or have been released freely to the public domain. Moreover, depending on how you use them, fake books arguably may fall under the exemption which allows copyrighted material to be used for not-for-profit, educational purposes. (My personal opinion is that having these sorts of materials freely available serves the greater good for musicians, teachers, and songwriters/composers, but if you have a moral, legal or pedagogical objection to fake books, you are free to not use them.)

If you're looking, though, a good place to start is on the Internet Archive, which has a long list of fake books that can be downloaded in PDF format for free.

Other lists of downloadable fake books (with some overlap with the Internet Archive list) can be found here, here, and, if you're a member of Scribed or willing to sign up for a free account, here.

Some other links to individual fake books: