Brimming with the South American overtones, this music is a lesson in just how far Latin jazz has progressed, and where it is going...representing Negroni's Trio's sense of fresh directions and exploration, continually evolving its hybrid music. --All About Jazz 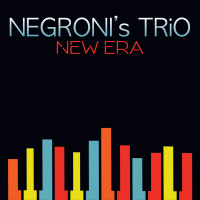 slideshow
Genre-bending CD Explores A Multitude of Music which Group Founder Jose Negroni Grew Up With and Loves.

New Era, the stunning new CD from multiple Grammy-nominated Jazz group NEGRONI's TRiO sets a new pace for the band in its exploration of multiple musical styles and sounds which have influenced Trio founder Jose Negroni throughout his life. Produced by Jose, New Era is a departure from their previous eight recordings stylistically and is set for release September 8th via Sony Music Latin. Both domestic and international tour dates will accompany the release.

NEGRONI's TRiO is made up of Jose Negroni, Josh Allen and Jose's son, Nomar Negroni. Due to his musical (Jazz) chops, Jose Negroni worked early in his career as musical director to many Latin pop artists and at one point even worked at Sony ATV Music Publishing. In 2002 he then, along with his son Nomar, decided to form the Trio. However from the very beginning he was always being directed as to what repertoire to include on their albums. After eight albums, this one being the ninth, he was finally allowed, as he requested, to select all of the repertoire without objections and interference from anyone.

As a music director for other artists and having worked at Sony ATV Pub, Jose Negroni was exposed to a wide palate of repertoire that afforded him deeper and broader knowledge of multi-genre repertoire. It resulted in Negroni truly broadening his personal list of favorite songs, and this new album is just that- a collection of songs he is passionate about and that he always wanted to record. From reinterpretations of classic Jazz tracks such as “A Train" and “Sweet Georgie Fame" to new takes of pop standards such as “That's The Way Of The World," “Sunny" and “Isn't She Lovely" to the Brazilian and Latin leanings of “El Incomprendido," “Perfidia" and “Brazilian Love Affair," NEGRONI's TRiO traverses the global musical soundscape.

Still keeping to their straight-ahead Jazz trio setting, the trio has embellished the repertoire with electric keyboards throughout the entire album as well as a string quartet. Additionally, there are also four featured guest vocalists on the album, beginning with Cuban songstress Aymee Nuviola performing “Sunny” who provides an Afro-Cuban dose to the track unlike ever heard before. Nuviola most recently played Celia Cruz in the Telemundo/NBC novella “Celia” and she has a long career beginning in Cuba as a vocalist for the world known “Irakere”, which led to eventually developing her own brand and style worldwide as an international artist.

Another guest is the exquisitely talented Brazilian artist and Grammy winner Rose Max. Continually performing around the globe with her husband (the other half of her personal duet), Rose delivers an extremely original interpretation of “Perfidia” in Portuguese.

The third guest vocalist is Pedro Capo also a Sony Latin artist. A singer, musician and actor, Capo performs a song originally written and recorded by his grandfather Latin music legend Bobby Capo. Interesting to note that Jose Negroni as a young pianist accompanied Pedro’s legendary grandfather to the same song. This time around Negroni along with the younger Capo deliver a version completely unlike the original.

The fourth guest artist is rap/vocalist LapizConciente (Conscious Writer). Lapiz is considered the “Father” of the Dominican Republic rap scene. He raps over the jazz standard “Take the A Train” and gives riding the train/subway a whole new meaning. He raps about the daily hustle and bustle of riding the train and urban living.

Born and raised on the southern coast of Puerto Rico, Jose Negroni leader and founder of NEGRONI’s TRiO commenced his humble beginnings in the Caibbean. A pianist, composer and arranger, Negroni combines his original classical style with tantalizing fusions of jazz and Latin rhythms, and his group, NEGRONI’s TRiO equally conveys his musical personality to the many world stages where they have captivated the hearts of so many audiences.

Beginning his career as a music teacher, Negroni fulfilled his early musical years educating young promising talents in the world of music and later developing and strengthening his musical chops as musical director for many Pop Latin artists. Today, years later, teaching and mentoring still continue to be part of his daily life as he continues to find the space to devote time between concert tours in order to give back to the music education community.

Together with his son and protégé Nomar Negroni, an incredibly talented drummer with precise vigor, a flair for showmanship, and a graduate of the Berklee College of Music, and Josh Allen, graduate from the University of Miami’s Frost School of Music, a supremely talented bassist providing the drive for the melodies and groove, the NEGRONI’s TRiO has been able to mesmerize audiences with their unique brand of jazz that fuses classical and Latin rhythms.

NEGRONI’s TRiO has performed all throughout the globe on stages that include many U.S. and international Jazz festivals as well as numerous key Jazz venues throughout the United States, Japan, Spain, Italy, South America, the Caribbean, Latin America and New York’s world famous Blue Note Jazz Club. With a catalog of eight albums and “Three Latin Jazz Grammy Nominations” (2005, 2012 & 2015), NEGRONI’s TRiO always seduces and entertains their audiences across the continents. The music of NEGRONI’S TRiO receives airplay in more than 600 radio stations worldwide that includes the U.S., Japan, Spain, Argentina, England, Greece, Uruguay, Indonesia and Mexico.

NEGRONI’s TRiO always seduces and entertains their audiences across the continents by taking musical risks with performance and repertoire, and the result is an array of classic lyricism mixed with innovative and sincere improvisations that quenches their audience’s thirst for world class Jazz and beyond.