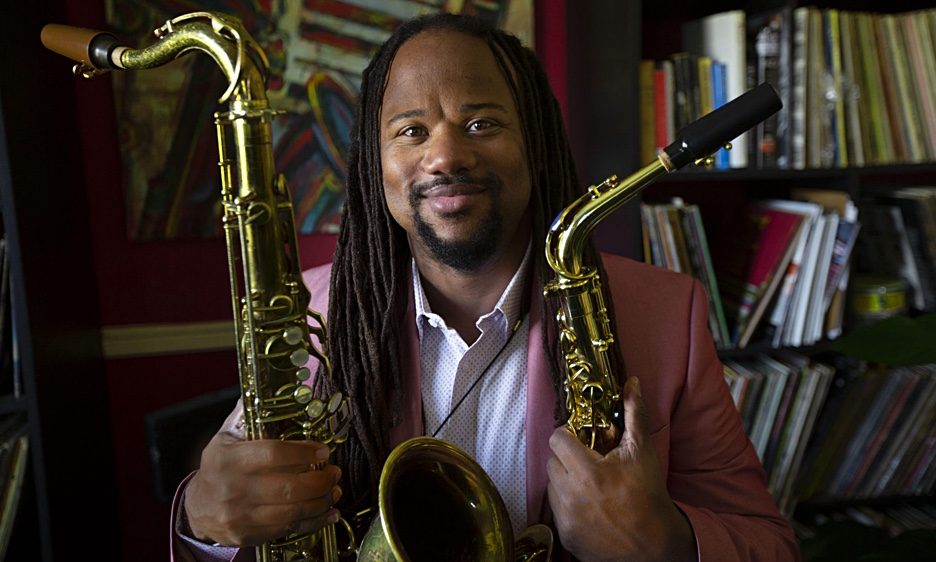 People sometimes forget that music functions for musicians in the same way it does for listeners. It help relieve all the negativity we're surrounded by, helps us escape and relax.
—Rahsaan Barber 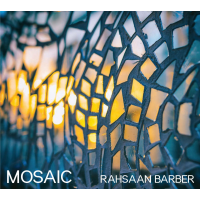 As gifted a composer as he is an instrumentalist, tenor/alto/baritone saxophonist Rahsaan Barber offers a panoply of his scintillating originals on Jazz Music City’s April 9 release Mosaic. The double album features Barber working with two separate frontline partners—his twin brother Roland Barber on trombone, Nathan Warner on trumpet, and the rhythm section of pianist Matt Endahl, bassist Jack Aylor, and drummer Derrek Phillips—as he explores 15 of his straight-ahead jazz compositions.

Double-disc recordings are often associated with sprawl and overweening ambition. Yet what’s remarkable about Mosaic is its consistent tightness and discipline. For starters, Barber wrote the bulk of the material in two weeks, and recorded all of it in two days. Yet quick output has not resulted in underdeveloped output: Each of Barber’s tunes is both rigorously structured and richly melodic, full of both alluring hooks and deep humanity.

“People sometimes forget that music functions for musicians in the same way it does for listeners,” says Barber. “It helps relieve all the negativity we’re surrounded by, helps us escape and relax.”

Which is to say that, although his music has the classic, timeless quality of an album by Ray Brown or Art Blakey’s Jazz Messengers, it does not shy away from addressing contemporary dilemmas. Indeed, Mosaic is bookended with timely observations—it opens with the gripping, surprisingly poignant “Quarantine Queens” and closes with the haunting elegy “Breonna Taylor (How Many More?).”

Much of what comes between those endpieces, however, is joyful, life-affirming stuff. From the down-home “Pink Piranha” (a feature for Barber’s baritone sax) and the welcoming “Jambo Rafiki” (with Roland Barber playing conch shell) to the self-explanatory “Swang That Thang” and the sanctified church evocation “Sunrise Service,” Barber does indeed offer a glorious respite from the darkness that he pushes to either edge.

Yet for the clarity of vision Mosaic puts on display, Barber gives as much credit to his ace sidemen as to himself. “I put less on the page than I used to,” he says. “I rely more on their intuitiveness, knowing they’re going to do something good with the music…. The tunes still have a strong identity, but that’s less defined in the writing.”

Rahsaan Barber, who entered the world on April 2, 1980, was born and raised in Nashville. Fitting for America’s “Music City,” he grew up in a musical family, with his grandmother, both parents, and two brothers all singing or playing instruments. Barber’s mother introduced him to soul music; his father, a Memphis native, to blues and R&B and his grandmother to classic jazz. It was the last of these that Barber would channel into his saxophone (an instrument on which he followed his older brother, Robert).

Accompanied by his trombone-playing twin brother, Roland, Barber matriculated at Indiana University, where both brothers studied under pioneering jazz educator David Baker. After completing their undergraduate work at IU, the Barber twins earned master’s degrees at Manhattan School of Music; Rahsaan is now a doctoral student in classical saxophone at the University of Memphis.

His musical education was profound in its effect: Barber himself has pursued a career as an educator. Shortly after finishing his master’s, he was hired as a saxophone instructor at Belmont University in Nashville, moving from there to Tennessee State University and then to the University of North Carolina, where he is currently an assistant professor of music. He has also presented master classes at numerous other universities.

In the meantime, he has continued to develop a performing career. The brothers made an album as co-leaders, Twinnovation, in 2000; his first album as a leader, Trio Soul, arrived in 2005. Barber then spent many years freelancing on the Nashville scene, leading to tours with Kelly Clarkson, Lauren Daigle, the Wooten Brothers, and Delfeayo Marsalis. Between those gigs and the university ones, he issued Everyday Magic, his first collection of all original tunes, in 2010, with the standards-intensive Music in the Night following in 2016. Off the road with his doctoral studies and teaching duties at UNC, Barber adds another jewel to his treasury with Mosaic.