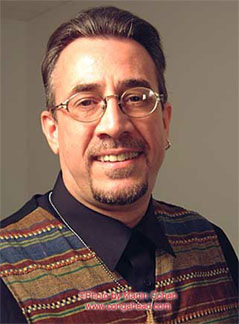 slideshow
The recently Grammy nominated Manhattan School of Music Afro-Cuban Jazz Orchestra directed by Maestro Bobby Sanabria honors another Maestro, the legendary composer, arranger Ray Santos on Friday, October 23 at 7:30 p.m. in the School's John C. Borden Auditorium. That evening, showcased will be music that will span Maestro Santos's entire prolific career. Performed will be specific pieces that he either composed and/or arranged for such legends as Machito & The Afro-Cubans, Tito Puente, Mario Bauza' as well as his work for the soundtrack of the Mambo Kings and vocalist Linda Rondstat. A program highlight will include Ray Santos's Suite for Puerto Rico. Bobby Sanabria says, “Maestro Santos's Suite for Puerto Rico traces the imaginary journey of a native Puerto Rican with his folk music traditions from the mountainside to the modern urban environment of New York City where jazz and mambo rule."

Tickets, priced at $5 are required. They are available at the Manhattan School of Music Concert Office by visiting msmnyc.edu or by calling 917 493 4428.

RAY SANTOS - Born of Puerto Rican parents in New York City where he was raised 80 years ago, is a legendary, four-time Grammy Award winner for Latin music, and Academy Award nominee for Best Song in a Motion Picture - “The Mambo Kings." A graduate of the Juilliard School of Music, Ray Santos has played, recorded, composed and arranged for front line orchestras throughout the Latin music industry for more than 50 years. He has collaborated with artists such as Linda Ronstadt, Julio Iglesias, Tito Rodriguez, Tito Puente, and Dizzy Gillespie to name a few. Hailed “El Maestro" by those who have known, worked and studied with him, Santos is considered to be one of the most prodigious contributors to Latin music for the last half-century.

Ray Santos reveled in the atmosphere of the Big Band Era. During this period he absorbed the popular music of his folk from the Caribbean and the Swing Music of the 1930's and 1940's. In 1948, while listening to Symphony Sid on the radio, he heard Charlie Parker soloing with Machito and His Afro-Cubans. The thrill of that moment still in his voice, Ray excitedly describes his reaction, “WOW, This is it! This is the real meeting between Jazz and Afro-Cuban Music."

Creative determination compelled the young saxophonist of the 1950's to arrange and compose music that captured the incessant rhythmic drive of the Afro-Cuban Sound fused with the power and sonority of Big Band Jazz. The ace arranger penned an extensive output of charts, recorded by two generations of the most influential musical figures in contemporary American and Caribbean music, such as Machito, Tito Puente and Tito Rodriguez. His career from the 1960's into the early 1980's matured in Puerto Rico where he wrote and directed music for television, produced recordings for established and emerging Salsa Bands, and played for many top stars in the business. Upon returning to New York, Santos contributed several arrangements to Eddie Palmieri's 1986 Grammy-winning album in the Latin Music category. His career as a music educator at City College of New York has established him as an authority on Caribbean music, teaching a new generation of musicians. Media and film producers have contracted him as an arranger and music consultant and he remains an artistic innovator in the field.

In 1999 Ray collaborated with Paquito D'Rivera in the production of Maestro D'Rivera's album, “Tropicana Nights" that was awarded a Tropical Latin Grammy. In December 1999 he co-produced, with David Chesky, the CD titled “The Conga Kings" featuring Candido Camero, Carlos “Patato" Valdes and Giovanni Hidalgo, three world-class exponents of conga drumming. In 2000, Ray Santos did arranging for the “Masterpiece" production with Tito Puente and Eddie Palmieri. This CD was awarded a Grammy. A second CD “Conga Kings Jazz Descargas" with Alto Saxophonist Phil Woods, has been recorded and released in July 2001 on Chesky Records.

BOBBY SANABRIA - Multiple Grammy nominated as a leader and on numerous other projects as a sideman - drummer, percussionist, composer, arranger, conductor, producer, educator, film-maker, bandleader, and multi-cultural warrior, Bobby Sanabria has performed and recorded with such legends as Dizzy Gillespie, Tito Puente, Mongo SantamarÃa, Paquito D'Rivera, Ray Barretto, Candido, Henry Threadgill, Larry Harlow, and Afro-Cuban jazz Godfather, Mario BauzÃ¡. His first solo recording, N.Y.C. AchÃ has been become a cult classic. His first big band recording, Live & in Clave!!!, was nominated for a mainstream Grammy in 2001. In 2003 he was nominated for a Latin Grammy for, “50 Years of Mambo", A Tribute to Damaso Perez Prado. His 2005 Quarteto AchÃ disc was hailed by the critics as giving a new vision to the standard jazz quartet. The readers of DRUM! magazine named him Percussionist of the Year in 2006. His 2007 recording “Big Band Urban Folktales" on the Jazzheads label was a 2008 Grammy nominee. This South Bronx native of Puerto Rican parentage is a 2006 inductee into the Bronx Walk of Fame where he has a street named after him. His latest release, the 2009 “Kenya Revisited Live!!!" on the Jazzheads label is a re-imagining of the legendary “Kenya" album by the Machito Afro-Cubans with incredible new arrangements with Bobby conducting an incredible big band of young lions from Manhattan School of Music that has astounded critics and fans has just been nominated for a Latin Grammy for Best Latin Jazz recording of 2009.

He holds a BM from the Berklee College of Music and is on the faculty of the New School and Manhattan School of Music where he conducts Afro-Cuban Jazz Big Bands at both schools. He leads his own Quarteto AchÃ, nonet AscensiÃ³n, and his multiple Grammy nominated big band. He was associate producer of the TV documentaries “The Palladium: Where Mambo Was King" shown on BRAVO, winner of the IMAGINE award for best TV documentary of 2003 and “From Mambo to Hip Hop", ALMA award, best documentary for TV which was shown on PBS in 2007. He is the author of the acclaimed video series, Getting Started on Congas and he is a featured performer on the DVD, Modern Drummer Festival 2006, from Hudson Music. Mr. Sanabria is featured in the upcoming documentary, LATIN MUSIC USA, which airs on PBS in October 2009.

The recently Grammy-nominated Manhattan School of Music Afro-Cuban Jazz Orchestra was established in 2000 by Bobby Sanabria and is made up of an international ensemble of student musicians from both the graduate and undergraduate levels. The MSM Afro-Cuban Jazz Orchestra has reached international acclaim by performing to standing room only audiences at the 2001 International Association of Jazz Educators Conference (IAJE) as well as other New York City venues such as Birdland, the Jazz Standard and Dizzy's Club Coca-Cola at Jazz at Lincoln Center. In October 2007, they performed an outdoor concert with Candido Camero on the plaza of the Harlem State Office Building located on 125th Street, as part of MSM's 90th anniversary celebration. The MSM Afro-Cuban Jazz Orchestra is dedicated to performing the music of 'la traditin' and pays homage to these legends while continuing to pass on and advance the tradition to the next generation by also premiering new works. Jazz artists who have been guest performers with the ensemble include Tom Harrell, David Sanchez, Sonny Fortune, Dave Valentine, Arturo O'Farrill, Ray Barretto, among others.

“Kenya Revisited Live!!!”, featuring Bobby Sanabria and the Manhattan School of Music Afro-Cuban Jazz Orchestra has been nominated for 2009 Best Latin Jazz Album in the Latin Grammys. This recording also features NEA Jazz Master and Living Legend Candido Camero as guest artist. Kenya Revisited Live!!! was recently released on the Jazzheads label, and was recorded at a historic concert held at Manhattan School of Music on April 1, 2008 titled Kenya Revisited. The concert celebrated the 50th anniversary of Machito & The Afro-Cubans 1957 Jazz Masterwork, Kenya, and showcased the legendary recording in its first-ever live performance, in its entirety with updated new arrangements.

Bobby Sanabria says about the recording of Kenya Revisited Live!!!, “Now 50 years after it was released to the public, we honor Mario Bauz, Machito, and all of the musicians who participated on the original recording with KENYA REVISITED LIVE!!!! Recorded live in concert, you’ll hear a new generation of players tackle this incredible music as it is re-worked with new progressive arrangements that reflect the current state of jazz virtuosity. Rejoice as the torch is passed to these young fire breathing dragons who have dedicated their lives to America’s greatest art form jazz, and the branch of that art form that represents all of the America’s, Latin jazz.”