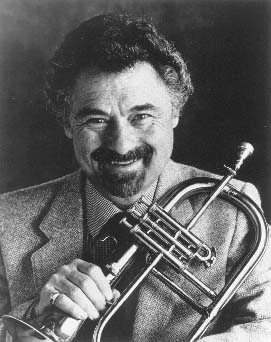 slideshow
Yesterday, I received an enormous number of emails from readers who either love Shorty Rogers's Chances Are It Swings or were unfamiliar with the West Coast jazz masterpiece and were happy to be turned on to it. So today, I figured I'd provide clips of Shorty Rogers's transition into a leadership role for RCA in 1953. While Rogers had just three recording sessions as a leader that year, he played on and arranged for a sizable number of other musicians' recordings, solidifying his reputation in Los Angeles.

Today, to satisfy those familiar and those unfamiliar with Rogers, I decided to accommodate both by providing audio for his three leadership albums in 1953. They would become a major influence on the Southern California jazz scene in the months that followed.

Here's Powder Puff. Note the inclusion of Graas's French horn and Gene Englund's tuba, which give Rogers's writing cinematic elegance and a heavy brass bottom. Interesting how the descending eighth-note figures have a Give Me the Simple Life feel...

Here's The Pesky Serpent, with the same personnel.

Here's the ballad Bunny. Dig the tasty solos by Art Pepper, Milt Bernhart, John Graas before the song shifts into double-time with a Latin snare beat before resuming its reflective feel with Pepper's return...

Here's Pirouette, which sounds like it's based on the chord changes to Out of Nowhere...

Here are the second set of four tracks for Shorty Rogers and His Giants that were recorded on three days later on January 15, 1953 with the same personnel from January 12:

Here's Diablo's Dance, with Hampton Hawes pecking the piano notes at the start...

Here's the entire Cool and Crazy...

And finally, in July 1953, Rogers recorded four tracks for a motorcycle-gang movie due in December starring Marlon Brando called Hot Blood. The songs were written and recorded, but at the last minute, Columbia decided to change the name of the film to The Wild One. The 7-inch EP (top) was recalled by RCA and destroyed, but not before some made it into the marketplace. The personnel: Shorty Rogers, Conrad Gozzo, Maynard Ferguson, Tom Reeves and Ray Linn (tp); Bob Enevoldsen, Jimmy Knepper and Harry Betts (tb); John Graas (fhr); Paul Sarmento (tu); Bud Shank and Herb Geller (as); Bill Holman and Bill Perkins (ts); Jimmy Giuffre and Bob Cooper (bar); Russ Freeman (p); Joe Mondragon (b) and Shelly Manne (d). Another breathtaking band. Here are the tracks:

Here's the gorgeous Blues for Brando...