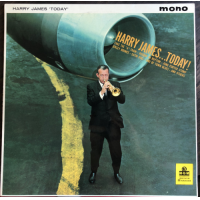 slideshow
Throughout the 1950s, Count Basie saw Harry James in his rear-view mirror. For James, Basie was an inspiration and a model on which to record. Their connection dated back to 1939, when James recorded Two O'Clock Jump, a trumpet-driven interpretation of Basie's popular One O'Clock Jump credited to Basie, James and Benny Goodman.

The update became James's closing theme and an exercise in attempted one-upmanship. In 1952, when Basie formed his New Testament Band, a re-tooling of his dance band for the sofa-listening age, James followed suit, viewing Basie's updating as a way forward for his own relevance.

Throughout the 1950s, James released powerhouse albums with updated scores, in some cases by Neal Hefti and Ernie Wilkins, who were associated with Basie. These James albums are forgotten now, but his bands in the '50s could send songs into orbit and were especially effective on interpretations of Basie hits. While the covers seemed suicidal given Basie's soulful simplicity and knockout punch, James's covers were routinely intriguing with an compelling kick.

In early 1955, James recorded Harry James in Hi-Fi. As the cover indicates, it featured new technology that turned a black-and-white, pre-'55 sound into color. Short for “high-fidelity," the recording approach juiced the quality of sound reproduction. High-fidelity also coincided with the expansion of the 10-inch LP to 12 inches, ushering in an age of better sound systems, longer-playing albums and more dynamic speakers. The James hi-fi album did reasonably well, so much so that James recorded More Harry James in Hi-Fi later in the year.

The follow-up had a stronger feel than its predecessor. Among the tracks that soar were The Mole, Crazy Rhythm, These Foolish Things, Somebody Loves Me, Walkin' Home and April in Paris, a cover of Basie's arrangement that was played by the band in clubs but not released on Basie's famed April in Paris album until 1957. Perhaps that's why it was held back by Capitol.

Originally slated for More Harry James in Hi-Fi, April in Paris came out on a more recent reissue of the album. The James recording is extraordinary and was scored by Ernie Wilkins, who had left the Basie fold over a pay dispute.

Throughout the decade and into the 1960s, the James band had its own sound—bright but taut with a rigid swing style and brassy finish, topped by James's powerful meandering trumpet. Nearly all the James albums during the period are still worthwhile, including Jazz Session, Wild About Harry, Harry's Choice, New James, Harry James Today, Harry James Plays Neal Hefti and others.

Here's Ernie Wilkins's arrangement of Somebody Loves Me...