One night only! The music of Thelonious Monk combine with the Rhythm of Tango to bring you Monk-Tango! Join us for an evening of romantic music, award winning tango dancing, and passionate singing. If you like "Dancing With The Stars" then you'll love Monk Tango! 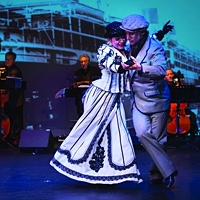 slideshow
Artistic mergers are a tricky business. In order to truly wed different streams of thought and expression, an artist must hold firm to the artistic principles of each while finding or paving some sort of common ground. That’s exactly what bassist Konrad Adderley has done with Monk Tango—a multi-dimensional concert experience coming to Flushing Town Hall on the eve of what would have been Thelonious Monk’s ninety-eighth birthday.

With due respect and reverence, Adderley addresses tango standards and merges traditional tango rhythms with Monk’s melodies, creating something that’s at once authentic and wholly unique. Much loved tango classics like “A Media Luz” and “Danzarin” are given their due, and Monk classics like “’Round Midnight,” “Monk’s Mood,” and “Ruby, My Dear” are refashioned, seated atop the swaying and swooning rhythms of tango. But don’t be fooled into thinking this is some cheap compromise or fusion. Adderley is quick to dispel such thoughts, noting that, in addition to tackling tango favorites, the idea was to “write traditional tango using the melodies of Thelonious Monk as the top voice,” not some sort of watered-down substitution. His arrangements, and the arrangements of Argentinian bandoneon master Tito Castro, succeed in said mission. Whether reflecting on “Reflections” or delivering “Crepuscule With Nellie” as a milonga, these hybridized forms always remains true to Monk’s vision and the rhythmic language of tango.

While the bridging of musical worlds is paramount in this artistic pursuit, it’s not Adderley’s only aim. He actually went well beyond that, bringing wholly different artistic disciplines together in service to the music. Instead of simply creating a sit-and-listen experience, Adderley delivers a multi-platform performance that merges singing, dancing, and instrumental music. It’s a feast for the eyes and the ears, as tango standards mingle with the newly minted Monk tangos, dancers swiftly slide and flow across the stage, and the entire ensemble seduces with its alluring work.

Adderley, who’s held the bass chair in the pit orchestra for Broadway’s Wicked for the past thirteen years, worked on numerous other Broadway productions, and performed with such iconic artists as Sonny Rollins, Ray Charles, and Aretha Franklin, is uniquely equipped to bring together these different art forms. His vast experience in those settings, often acting as the glue that helps to hold everything together, aided him in putting together this project. With said background, he’s able to successfully weave those art forms together into a perfect whole with Monk Tango, as his arrangements set the scenes, his bass holds the music together, and his doubling on bandoneon allows the music to take on another dimension.

While Adderley is the visionary behind Monk Tango, this program isn’t centered on a single figure. A production such as this takes a village of talent to produce, and Adderley populates that village with some of the best and brightest out there. He’s joined by Tito Castro, the aforementioned bandoneon virtuoso who’s been a key figure in the world of tango for the past six decades; violinist Nick Danielson, a player who’s equally comfortable serving as the assistant concertmaster for the New York City Ballet Orchestra, recording Latin Jazz, or performing the titular role in Broadway’s Fiddler on the Roof; Puerto Rican drummer-percussionist Joel E. Mateo, who’s worked with everybody from saxophonist Miguel Zenon to pianist Elio Villafranca; Madrid-born pianist Emilio Teubal, a rising star who spent a good deal of time performing in the tango scene in Buenos Aires before becoming an integral part of the jazz world in New York; and vocalist Renzo Padilla, a Peruvian who’s well-versed in various Latin idioms, from tango to salsa and beyond. Together, these six musicians manage to bring out the rich rhythmic language and subtle nuances in tango while shining a light on the well-crafted melodies of Monk.

Adderley clearly took his time seeking out the right musicians for this project, but he also made sure to balance the scales by bringing in some outsized dance talent. The team of Yaisuri Salamanca and John Hernan Raigoza, which took First Place at the 2007 Tango World Championship in Colombia and Third Place at the 2008 Tango World Championship in Buenos Aires, and the team of Hernan Brizuela and Mariana Parma, one of the most lauded tango duos operating today, help to bring the passion and heat of tango into full bloom on the stage. And when married to the melodies of Monk, their dancing takes on new dimensions. Those who come to this show as jazz fans will be able to appreciate the way these dancers physically connect to Monk’s quirky and catchy creations, and those who’ve only come to know tango through popular television programs like “Dancing With The Stars” will be transported to a realm that’s both recognizable and fresh.

In organizing this performance of Monk Tango, Adderley paid attention to every possible detail, including dining options, transportation logistics, and the venue itself: Flushing Chinatown is within walking distance of the show, providing plenty of options for pre-show meals for those who’ll wisely take the time to arrive early, and Flushing Town Hall, rich in history and centered in a culturally-vibrant area of Queens, is easily accessible by car and public transportation. The building’s 308-seat concert hall/theater provides the perfect setting for this show, as it’s small enough to feel intimate and large enough to support the needs of the artists and house the expected, packed-house audience.

Thus far, Monk Tango has been solely confined to the stage, but Adderley plans on expanding on the scope of the project by bringing it to the studio: plans are already in the works to record this music in Buenos Aires in 2016. In the meantime, Monk Tango can only be experienced as a live production, so don’t miss out.

Tickets are going fast and you don’t want to miss this one-of-a-kind show.