This album and upcoming tour mean so much to me and are the natural progression for me artistically. I love being able to craft a show and offer it in a way that feels authentic.
—Molly Mahoney 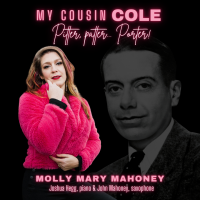 Molly Mary Mahoney} star of the stage since age ten in several genres, will release her second album on June 9, 2022. The album, which follows her first jazz-fueled album, holds special significance. My Cousin Cole: Pitter, patter... Porter! features specially selected love songs of her actual cousin, Cole Porter. The discovery of that familial connection had a steady hand in strengthening her interest in Porter and his song book. This in turn was fed by her love and appreciation for family, forged by the close relationship she had with her own.

My Cousin Cole will be available as a digital and physical compact disc release on June 9, 2022 (it’s no accident that the date is Porter’s birthday). While Molly is no stranger to streaming platforms, she’ll be controlling sales a bit more in-house through Bandcamp and her website. The first two singles, “All of You” and “In The Still of The Night”, are available to stream on multiple platforms.

Molly has been performing almost her whole life and started touring after graduate school, taking a beat during the time we all spent firmly in the shadow of coronavirus. A major personal meaning of this album is that she will return to live music following its release, though she has already begun to perform to rave reviews. Her main album release show will be held at the Chico Women’s Club (downtown, not on campus) on Friday June 24. Tickets are $25; doors open at 7:00pm and the show is at 7:30pm. Molly is looking forward to signing albums after the show and connecting with fans and the Chico community in an analog way.

Circumstance has found Molly in several rural areas she loved, including Chico to attend college before settling in the east bay area in California. But Molly puts down roots everywhere she goes and in a way, this Chico show is a homecoming. Molly shares that she’s already feeling more “at home” through the process of putting this album–and herself—out there: “I had the joy (pun intended!) of performing the mezzo solos in Beethoven's 9th with the North State Symphony in Redding and Chico this last weekend. It was wonderful catching up with old friends and colleagues and I look forward to connecting with more people at the June 24th show.”

Chico is decidedly a special place for Molly. Not only did she attend California State University Chico, her family settled in the area. She remembers her life there fondly, telling us, “I love returning to Chico to visit my parents, and to connect with friends and teachers from school. I have such great memories of making awesome music in choirs and many bands over the years. Chico is also where I met my husband [in] my senior year of undergrad.”

Molly’s family came to Chico from upstate New York after first leaving the midwest. While the family instilled a love of nature and tending land and animals, as well as science and learning into everyone, they always returned to music. From singing at family gatherings to forming 19-piece ensembles like their band, The Skyliners, in Chico, music and many forms of jazz were ever present. Family and music will always be synonymous to Molly.

That love of family and music certainly helped clarify her goal of creating a tribute album to Cole Porter, of whom she was a longtime fan before finding out of their shared DNA. Molly likes to follow connections such as these, and points out one that really resonates with her: “The piano at the Chico Women's Club is a beautifully restored 1911 Steinway. In 1911, Cole Porter was 20 years old and a junior at Yale. He was already writing musicals for his class!” It’s fitting that the piano harkens back to his 20th year, as in hers, Molly was in Chico on her own creative and coming-of-age journey (carrying on the family tradition, if you will). 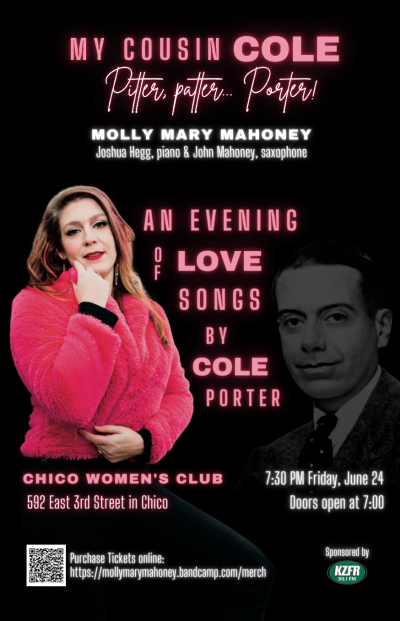 But this album is about going forward, grounded in the past though it is: “This album and upcoming tour mean so much to me and are the natural progression for me artistically. I love being able to craft a show and offer it in a way that feels authentic.” While Molly is always thrilled to perform with a band or artist from her past, she has come to appreciate the creativity of crafting and performing her own show and tour. She looks back to her 2019 success with no hubris, but still with pride: “My first cabaret show, Mischief!, that I toured in 2019 was really a culmination of my operatic and musical theater stagework, and my love of big band music.” This tour and album will build on that foundation.

Molly is a mezzo-soprano and crossover artist who makes the art her heart tells her to make. While COVID kept her from touring, she took the time to plan a major comeback. In that downtime, My Cousin Cole started coming together. Molly used the time to slowly and steadily craft her album and its themes, pulling together carefully curated Porter classics and bringing it all together with a simple but powerfully-unifying theme: his love songs. As her tour, coordinated with her album, comes alive, fans will see just how beautifully and seamlessly a plan can come together.