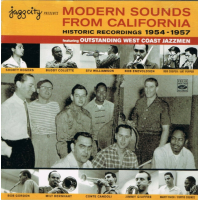 slideshow
West Coast jazz was the music of migrants. After World War II, work opportunities for skilled jazz musicians skyrocketed in Los Angeles, attracting gifted artists from different parts of the country. Two principal architects of the West Coast jazz sound in the early 1950s were Gerry Mulligan and Shorty Rogers—transplants from the East Coast. Many other participants were refugees from big bands that either broke up in Los Angeles or were touring there when musicians decided to quit.

Big bands were on the skids at the start of the '50s, as costs associated with touring climbed, audiences dwindled and new possibilities opened for small groups. Better musicians who wanted to be leaders could form small groups, giving them greater control of the music lowering costs. This was only possible because a revolution had taken place in the recording industry—the launch of 10-inch album. The new format opened doors to prolific composers and players who previously were members of big bands but now could record as leaders and be promoted on the covers.

The music that these small West Coast groups created was rooted in bop but more centered on group harmony and newly composed melodies rather than blues, standards or the chord changes of standards. The music also was more relaxed and airy in feel. As I wrote in my 2012 book, Why Jazz Happened, the upbeat spirit for this sound was built on a euphoria by exceptional white musicians (and Black artists that included Harry “Sweets" Edison, Red Callender, Lee Young, Curtis Counce and Buddy Collette). They saw a limitless economic future for themselves and their families. The music is loaded with optimism.

The white artists bought homes in the city's newly developed suburban regions, began to raise families and found themselves swamped with calls to record albums and movie soundtracks and compose for and perform on live TV. Black West Coast jazz artists had it harder for a range of reasons due largely to racism and segregationist policies in Los Angeles that included the American Federation of Musicians.

The point being that the ecstasy experienced by these white and Black musicians in boom times was expressed in the music they wrote and recorded. For context, it's important to remember what Los Angles was like at the dawn of the 1950s. An automobile and highway culture, the city was the most future-forward region in the country. Strip malls and large supermarkets were emerging, traffic moved unhindered, the weather was comfortable throughout the year, the beach was nearby and life was better than it had been while touring in big bands or shivering through the winter in a Midwestern or Northeast city.

An album that expresses all of this and is a good starting place for those not fully familiar with West Coast jazz is the two-CD set Modern Sounds From California: Historic Recordings, 1954-1957. Released in 2006 on Fresh Sounds, the material originally was produced by Leonard Feather on Blue Note's two Best of the West 10-inch LPs. The album features the West Coast's singular brand of harmony and counterpoint in group settings. The cross-section of music and artists provides a wonderful survey of the music's early and evolving sound.

The music also is available at Spotify in two volumes under Best From the West: Modern Sounds From California.

JazzWax clips: Before I play you some music, let me set the scene. Here's Los Angeles in 1954...

And here's a travelogue produced by the Atchison, Topeka & Santa Fe Railway featuring L.A. in 1953...

Keep in mind, rock 'n' roll hadn't been named yet, the Korean War had just ended, TV was just starting to make its way into people's homes and Charlie Parker was still performing. Into this environment came the following recordings featured on this album: