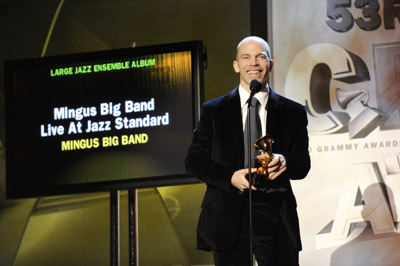 Seth Abramson, Artistic Director of Jazz Standard, graciously accepted the award last night thanking everyone involved in the album's recording from WBGO Radio to Union Square Hospitality Group's Danny Meyer. “We're so humbled by this! It's truly an honor to play such an integral role in keeping the Mingus legacy alive and kicking," exclaims Seth. “This never would've come to fruition without the perseverance and zeal of Sue Mingus."

Mingus Big Band Live at Jazz Standard celebrates the 50th anniversary of the 1959 seminal albums by legendary composer Charles Mingus (1922-1979). The recording was originally broadcast live at Jazz Standard on “Toast Of The Nation" from NPR Music, produced by Mark Schramm, Thurston Briscoe and Becca Pulliam for WBGO under the musical direction of Sue Mingus.