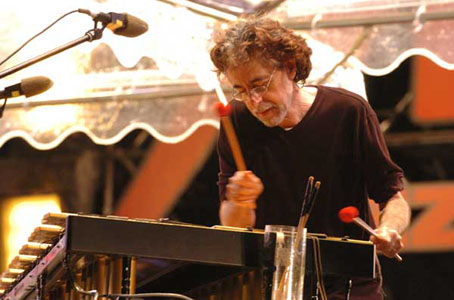 slideshow
Trane tributes remain a reliable if sometimes rote jazz tributary. Vibraphonist Mike Mainieri seems to recognize their resilient ubiquity on this outing, tweaking the formula in a number of intriguing ways and coming up with a program both familiar and singular in the execution. The success is due in no small part to his sidemen, both of whom easily sidestep the strictures of that largely outmoded signifier. Altoist Charlie Mariano was at the end of a long and fulfilling road when the session was waxed in 2005, but his impending demise is only fleetingly apparent in his playing which retains a plangent edge and tart vibrato while sustaining an unerring underlying swing even in the seldom moments when he overreaches.

The trio session grew naturally out of a string of prior duo performances with rehearsals and arrangements foresworn in favor of spontaneous play. Mainieri wisely added bassist Dieter Ilg, a colleague of Mariano's, to the mix as an anchor and fulcrum and his supple bass lines are equally accomplished in supportive and lead roles. Trane originals alternate with a handful of standards that were regular residents of his stage and session songbook. The three men make the most of the inherent space and harmonic density of the tunes. The rendering of “Giant Steps" on the second disc is a capsule of this sort of versatility with Ilg taking the lead at the onset, obliquely sketching the cascading theme with vigorous string stops before Mainieri's mallets flesh it further in a stream of luminous clusters. Mariano's recessed riffing expands into an ensemble passage where Ilg switches to a sturdy Latin bounce.

Stacked against the handful of now-hoary standards, the Coltrane pieces like “Mr. Syms" fare better, but representatives of the former camp still contain surprises. Ilg brings an ample amount of funk to the “I Love You" without upsetting the balladic mood, gently goosing Mariano into some spirited syncopations of his own that recall an Art Pepper-like insouciance. “Bye Bye Blackbird" opens with several choruses of jaunty dialogue between vibes and alto, Ilg sitting on the sideline before entering with a supple walking line. “Body and Soul" also gets a coat of fresh paint thanks to Mainieri's shimmering unaccompanied preface and the closing take on the national anthem miraculously manages to avoid schmaltz while remaining mellifluous.

Mainieri's spent much of his career in fusion settings most often with his own outfit Steps Ahead. Those experiences translate to his expert use of his instrument's pedals and motor in constructing colors and textures. This set is a welcome change of scenery for his mallets and proof that his talents are just as applicable to pared down settings. It's certainly made me want to check out more of his earlier work while using Crescent as a handy yardstick.