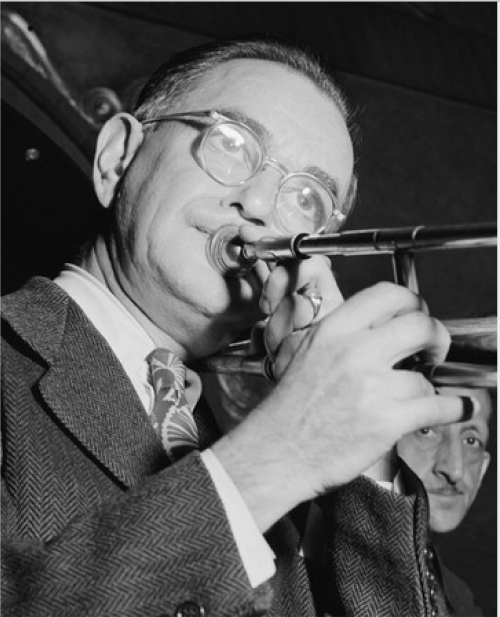 slideshow
The jazz trumpet dates back to Louis Armstrong and Bix Beiderbecke. The saxophone can be traced to Sidney Bechet and Frankie Trumbauer. And the piano dates back to Scott Joplin and Jelly Roll Morton. As for the jazz trombone, it starts with Miff Mole.

Mole is arguably the pioneer of the solo jazz trombone style. Born in New York in 1898, Mole began on the piano and switched to trombone at age 15. A member of the Original Memphis Five (founded in 1917 by pianist Phil Napoleon), Mole went on to form Miff Mole and His Little Molers with cornetist Red Nichols. A bunch of bands followed, but perhaps Mole's most famous collaboration was with Red Nichols and His Five Pennies.

The Nichols-led ensemble, with a parade of excellent musicians joining and leaving its ranks, recorded more than 100 sides for the Brunswick label. New Orleans in style, the Five Pennies were extraordinarily prolific, which was possible back then only if you were studio-savvy and flawless on your instrument.

Among those who played with the Five Pennies over the years were clarinetist Pee Wee Russell, violinist Joe Venuti, bass saxophonist Adrian Rollini, tuba and bassist Joe Tarto, trombonist Glenn Miller, and trumpeters Leo McConville and Charlie Teagarden, whose brother Jack veered from Mole's staccato attack on the trombone to a more legato, blues style. In the '30s, Mole adapted to Teagarden's more modern, moaning approach.

There are two ways to explore Mole. The fast way is through Miffology (Asv Living Era), a 24-song album of essential Mole in various ensembles from 1927 to 1945. The longer and more intense way is through the magnificent nine-volume Red Nichols set, The Complete Brunswick Recordings (Jazz Oracle).

Mole is so exceptional that if you listen to Miffology, you're going to want the Brunswicks. The music is sensational music in every way and important listening to understand what came next. The Nichols group was dynamic, energetic, sophisticated and cocky with slam-bang syncopation. As saxophonist Bill Kirchner recently reminded me, it was Gerry Mulligan who alerted him to the genius of Nichols. The Mulligan-Nichols connection makes perfect sense, since the inspiration for Mulligan's various contrapuntal ensembles in the 1950s had to have been Red Nichols and His Five Pennies.

Which is what makes jazz so great. There are so many jazz neighborhoods that you may have overlooked over the course of your love for the music. When you finally do get a chance to linger and explore ones from other eras, the joy is almost overwhelming. For years I foolishly skipped Nichols and Mole, automatically assuming the music was too dated and static to bother. Wow, was I wrong.