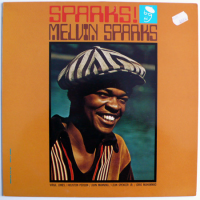 slideshow
In the late 1960s and early '70s, Prestige assembled a studio band that specialized in a new form of soul-jazz dominated by organ and horns. To keep everyone in the ensemble happy and to meet the label's production quotas, individual musicians in the band took turns as session leaders. The need for an efficient and prolific house band was two-fold: the surge in affordable component stereo systems from Japan and the rise of FM radio in African-American communities. In short, an abundance of jazzy soul was needed to meet the new demand for albums. It's the same reason Creed Taylor started CTI and Kudu, and other labels began recording long-form instrumental soul.

At Prestige, the studio band included trumpeter Virgil Jones, saxophonists Grover Washington Jr. and Houston Person, organist Leon Spencer Jr., drummer, Idris Muhammad, percussionist Buddy Caldwell and guitarist Melvin Sparks. There were plenty of others who came and went, but this was essentially the core group. Many of these great albums were produced by Bob Porter.

The tracks were Thank You, I Didn't Know What Time It Was, Charlie Brown, The Stinker and Spill the Wine. All five songs ran between 6 and 11 minutes, and were perfect for FM drive-time. Thank You is a cover of Thank You (Falettinme Be Mice Elf Agin), the Sly and the Family Stone opus. I Didn't Know What Time It Was is a straight-ahead guitar swinger. Charlie Brown is a funky cover of the 1958 hit by the Coasters. The Stinker is a funky blues with a soul-jazz feel, featuring Person on his sole tenor saxophone appearance on the album. And Spill the Wine is a funky jam version of the AM radio hit by Eric Burdon & War released earlier in 1970.

How in heaven's name did I arrive at Melvin Sparks a day after posting about Stan Getz? Like with all my posts, the music featured begins with a craving. For some reason, I was in the mood for some early-'70s FM jazz. The yen probably was brought on by an email from Bob Porter himself. My gateway to this fabulous genre is always the discography of trumpeter Virgil Jones, who appears on so many of these great Prestige soul-jazz sessions.

Dipping into my Melvin Sparks iTunes folder was a joy and a reminder of just how superb this musician was at a time when the jazz guitar took a funky turn. Back then, a younger generation of jazz listeners fed up with AM radio was in the market for more sophisticated versions of soul hits on tasty albums by instrumentalists who were never given their due. [Photo above of Virgil Jones]

Melvin Sparks died in 2011. In fact, all members of the studio band above have passed, except Houston Person.