SOURCE: JAZZWAX BY MARC MYERS
May 1, 2017
Sign in to view read count 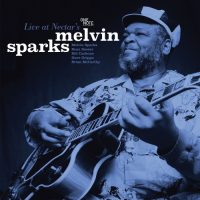 Just three months before guitarist Melvin Sparks died on March 15, 2011 at age 64, he recorded at a club in Burlington, Vt., called Nectar's, a club that's still there today (go here). Sparks was backed by members of his working trio—organist Beau Sasser and drummer Bill Carbone. But on this night, he added alto saxophonist Dave Grippo and tenor saxophonist Brian McCarthy. It had been several years since Sparks last used horns.

Now this live date has been released as Live at Nectar's (One Note) in the digital and vinyl formats. According to the credits, it was recorded by Caleb Bronz on Dec. 30, 2010, a working drummer based in Burlington. According to the liner notes by Bill Carbone, Caleb had the approval of Sparks and Nectar's Alex Budney. It seems the recording was a favor to Sparks, since the credits thank Sparks's family for “making the album possible." [Photo above courtesy of Nectar's]

Sparks, of course, was one of the leading guitarists of the soul-jazz movement starting in the mid-1960s. Born in Houston, Sparks started playing guitar at 11 and began working in high school with Hank Ballard and the Midnighters and then Little Richard's Upsetters, Little Richard's touring band in the 1950s. Sparks moved to New York several yearslater to work as a session guitarist at Blue Note Records, and he released his first leadership album, Sparks!, in 1970, thanks, I'm sure to Bob Porter and the crew at Prestige. From there, Sparks recorded on a long string of soul-jazz gems. His great strength was powerful rhythm playing and soulful solos.

On Live at Nectar's, the quintet recorded Leon Spencer Jr.'s Miss Riverside, the hit Ain't No Woman (Like the One I Got), Rusty Bryant and Jerry Taylor's Fire Eater, Sparks' Cranberry Sunshine, Bobby Womack's Breezin' and Sparks' funky Whip! Whop!.

The sound on this album is fantastic, and the soul-jazz is just the way it was back in the early 1970s. It has heat, energy and lots of soul, with Sparks taking lyrical guitar solos and laying down a thick mattress of rhythm playing when the horns are soloing. If you love this period of music, you're going to want to own it.