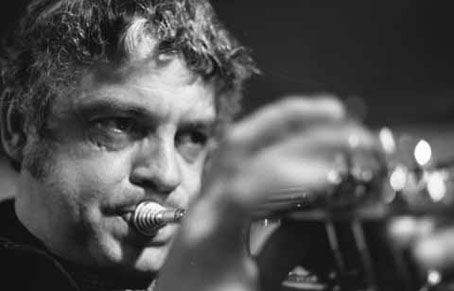 slideshow
Most Maynard Ferguson fans consider his years on the Roulette label (from 1958 to 1962) to be his finest big band recordings. They are ferocious on every level&#151from stampeding arrangements to spectacular musicianship by sections and soloists. But Ferguson's two records for Cameo that followed in 1963 come close. Both albums have just been reissued by Abkco on a two-fer set, and they pick up musically where Ferguson's Roulette output left off. [Photo: Maynard Ferguson at the Newport Jazz Festival in 1963]

Ferguson's relationship with Roulette ended badly in 1962. Despite brisk album sales, particularly among college students, Ferguson wasn't receiving royalty checks. When the trumpet star confronted Roulette owner Morris Levy in 1961 over the missing money, Levy's response was “You're working 12 weeks a year at Birdland, so?"

That remark was the last straw. But before he could depart the label, he was contractually bound to complete several remaining albums. As Bret Primack wrote in his fine liner notes for the now out-of-print Complete Roulette Recordings of the Maynard Ferguson Orchestra (Mosaic):

“The [Ferguson] orchestra would record some 45 tracks during the next three months [in late 1961 and early 1962]. The December '61 sessions surfaced on Maynard '62.

“Mike Abene: 'All of a sudden Maynard says we're going to be doing a lot of recording in the next few months. I went to work immediately.'

“Don Menza: 'Maynard had to get five albums out quick. so we all just started writing.'

“Lanny Morgan: 'That's how Don Menza and Don Raider became such good witters; they learned how to write quickly when we had to end the Roulette contract.'

“Maynard said, anybody in the band who wants to write, write as much as you like, and we'll record what we can."

Once Ferguson finished the marathon sessions, he signed with Cameo to record two albums. Sid Mark [pictured, with Frank Sinatra], a Philadelphia disk jockey who used Ferguson's Frame for the Blues as his theme, routinely had booked the band into the Red Hill Inn, a 100-seat club that was across the Delaware River in Pennsauken, N.J. Mark had close ties with Philadelphia's Cameo label.

At the time, Cameo was riding high with hits by Bobby Rydell, Dee Dee Sharp and Chubby Checker. When Ferguson told Mark he was unhappy at Roulette, Mark called Cameo's owner to tell him that Ferguson was available. Mark was able to bring the two together.

The result was two albums: The New Sounds of Maynard Ferguson (March 1963) and Come Blow Your Horn (August-September 1963). The first was arranged by Don Sebesky and the second was split among several different arrangers. What's interesting about these sessions is how radio-friendly they are compared with Ferguson's Roulette dates. Many tracks are under three minutes in length, and a good number have a patient, film score feel.

Unfortunately for Ferguson, his run at Cameo didn't last long as the label soon fell on hard times. Bob Shad, who produced Ferguson at EmArcy in the '50s, enticed him to record for Mainstream, which resulted in two more solid albums.

But by 1964, even the mightiest big bands were becoming expensive relics. Besides, four or five musicians with electric guitars, an electric bass and a set of drums was all a record label needed to turn a fast profit.

Time Out! My profile of Rudy van Gelder appears in today'sWall Street Journal. If you subscribe, go here. If not, hit the newsstands for a copy of the paper).

On Monday, I will start my five-part JazzWax interview series with the legendary recording engineer.

JazzWax tracks: You'll find Maynard Ferguson's The NewSounds of Maynard Ferguson and Come Blow Your Horn on The Complete Cameo Recordings (Abkco) at Amazon. Liner notes are by Bret Primack.