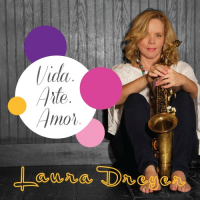 slideshow
Laura Dreyer, a native of the San Francisco Bay Area, has established herself as a vital member of the New York jazz scene. Always drawn to Brazilian music, the composer, educator and multi-instrumentalist created a “latinized" fusion incorporating elements of jazz, funk, and rock.

Dreyer was a founding member and contributing arranger for the big band DIVA. In this capacity, she worked with luminaries Dave Brubeck, Rosemary Clooney, Dee Dee Bridgewater, Slide Hampton and Clark Terry, among others. Additionally she has performed with Dr. Billy Taylor, Mel Lewis, Robert Palmer, Nnenna Freelon, Lea Delaria, Leny Andrade and Portinho. She was a band member for the award-winning musicals “Hot and Sweet" and the Duke Ellington tribute, “Hit Me With A Hot Note."

The National Endowment for the Arts awarded Dreyer grants in performance and professional jazz study/composition. She participated in the BMI Jazz Composer's Workshop and four of her songs have received an honorable mention in Billboard Magazine's songwriting contests.

Dreyer has been active as an educator, and continues to write for music publications.

Of her current work she says, “I discovered an intrinsic emotional quality in Brazilian music that helped me find a deeper level of self-expression. After having performed many times with Brazilian jazz artists throughout the years in New York City and Brazil, I began to envision recording my newest album in Rio de Janeiro. I had worked with world-class Rio-based jazz artists in Brazil, and realized that I had found the perfect group of musicians to perform my music and complete my vision.”

In the spirit of creating a multi- cultural recording, vocalist and music educator Professor Roger Wesby wrote lyrics in Spanish for one of Dreyer’s compositions. Brazilian vocalist Débora Watts adapted these lyrics to Portuguese, and penned lyrics to another one of Dreyer’s songs. Vocalist Teri Koide contributed her vocal talents and English lyrics to another piece, and Karen Rodriguez helped with further Spanish lyrics and stellar vocals. The repertoire was completed with the addition of two arrangements of a composition by the legendary Romeo Santos.

The 14 tracks of the CD were recorded in the historic neighborhood of Santa Teresa with engineer Carlos Fuchs at his state of the art studio.

Dreyer concludes, “I am grateful that the magic I felt during the recording session, and my passion for the fascinating sounds of Brazil, are captured on Vida. Arte. Amor.”