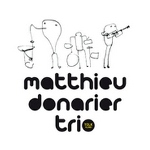 Matthieu Donarier plays with the usual suspects on his second album, following on from Optic Topic which was highly praised by critics when released in 2004. This new live album, recorded at Saint Nazaire and Angers, France, testifies to the increasing intimacy between the three musicians who have been playing together since their school days. It is with this trio (despite his other bands with Daniel Humair, Alban Darche and Patrick Caratini) that Matthieu Donarier demonstrates his talents as a saxophonist and also a superb composer.

He was brought up listening to a huge range of musical genres all of which he draws upon, plays with and transforms. He has toyed with New York jazz, the songs of Charles Trenet ("Il pleut dans ma chambre"), George Brassens and even the “Gnossiennes" of Eric Satie. Matthieu Donarier dips into all of these styles. He champions a non-linear approach and his composition is always full of surprises which allow plenty of room for improvisation. In these spaces we hear Donarier's harmonic tensions ("Abrakadabra"), melodic lines ("Au Refuge") and atonal experiments. Let's take the example of Brassens. It's easy to categorise him as one of the most 'jazzy' French singers in the chanson franaise tradition, but we know full well that playing with his repertoire can be like skating on thin ice, as countless disastrous cover versions demonstrate (e.g. Moustache's unconvincing attempts in the 1980s). However, in the hands of this young saxophonist the songs are given a fresh lease of life full of playful wit like the reggae version of “Le Roi des cons" or mambo “Le temps ne fait rien l'affaire"; which all take Brassens' simple melodies to another place entirely, an unpredictable, playful planet. Donarier's own tunes like “Abrakadabra" show the perfect harmony of this trio and Manu Codjia, who is as brilliant as ever (listen to how tight they are in “Novosibirsk"). Their fusional playing is the result of both togetherness and the marriage of their individual styles.

Over and above the compositions, however, it is Matthieu Donarier himself who impresses. He has proved himself to be an immensely talented saxophonist and has earned himself a place among the greats. From the beginning this album oozes with his rich rare 'sound', with its signature self control and subtle delivery. Hardly surprising then that Stephane Kerecki compared him recently to Tony Malaby, they are very much alike. In both cases they have a passion for this 'sound' whether they're exploring the super bass notes or mega treble (underwater scene), flighty or solid, runaway or bubbly. This incandescent self-control is also reminiscent of Donny Mc Caslin and Dave Binney, other pioneers of the school of modern saxophone, a category in which Matthieu Donarier refuses obstinately to be pigeon-holed. He is 'uncategorizable', impossible to stereotype or box in. We also know Donarier as a hugely talented clarinettist (he started playing the instrument at the age of 5!), but on the tenor sax he showcases his virtuosity with sensual phrasing, powerful belting sound and perfectly controlled vibrato. He evokes the easy, suave fluidity of Art Pepper. His tenor-playing is as velvety smooth as Lester Young's, transformed by the thin veil of the alto.

What he plays is deeply felt just as the music other great saxophonists who have long replaced words with a piece of themselves. This album's profundity is no surprise then, but rather a confirmation of Matthieu Donarier's almighty talent.