World Renowned pianist Matthew Shipp brings his trio to the Chapel of Our Lady Restoration in Cold Spring NY in support of his new double cd "The Art of the Improviser" on Thirsty Ear Records. 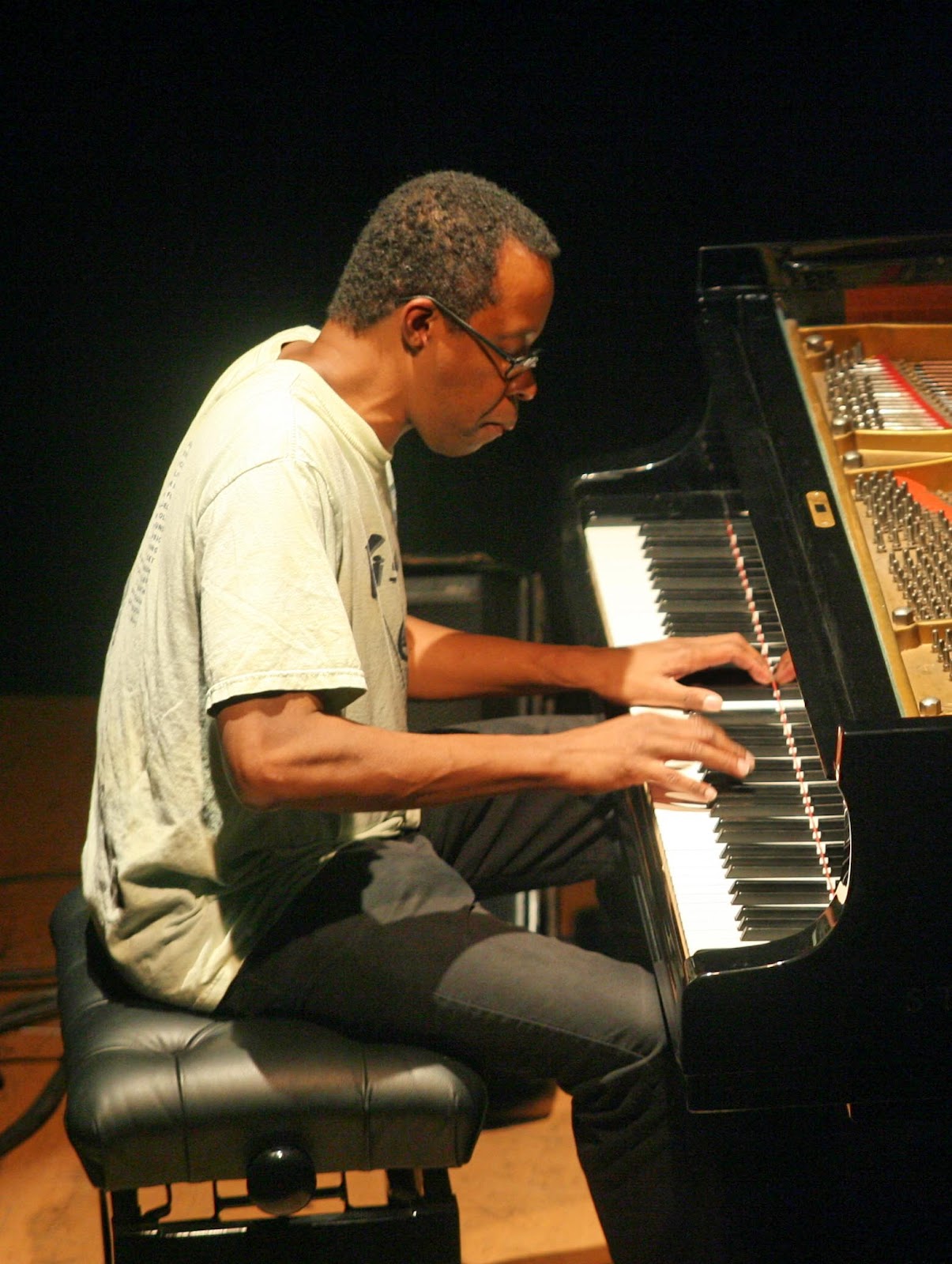 slideshow
World Renowned pianist Matthew Shipp brings his trio to the Chapel of Our Lady Restoration in Cold Spring NY in support of his new double cd “The Art of the Improviser" on Thirsty Ear Records.

“Watching Matthew Shipp play the piano is a bit like sitting ringside. Lefts and rights hit the keyboard's midsection in steady jabs, finding a rhythm that alternately lulls and stings. Or he might work his left hand, creating a rumbling dance of low-end notes. Then it comes: An unanticipated chiming cluster, landing like a roundhouse punch. At times, his playing turns meditative. Mr. Shipp's style knows no single pattern. Yet the boxing parallel is clear." —Larry Blumenfeld, Wall Street Journal

“It doesn't seem so long ago that pianist Matthew Shipp emerged as a fiery iconoclast of the piano, a fearless experimenter whose tempestuous soliloquies ranged freely among jazz, classical and avant-garde idioms. Shipp recently turned 50, and to mark the occasion he has released a monumental double-CD, “Art of the Improviser." Though not for timid ears, Shipp's pianism sounds as galvanic as ever...Few pianists command a comparable improvisational imagination, nor the technical wherewithal to realize it. Shipp sounds similarly dynamic in the live trio recording of the first CD, which...flies like the wind. Ultimately, “Art of the Improviser" not only sums up Shipp's achievements to date but points promisingly toward important music yet to come." —Howard Reich, Chicago Tribune

“One of the most daring and original pianists in jazz." —Rolling Stone

For several decades, celebrated pianist Matthew Shipp has been on a tireless journey to innovate a musical language that is at once so cerebral, emotional and physical that it becomes universally intelligible. On his improvisational mission to create such an ultimate musical language, and turning fifty years old this past December 7, 2010, however, Matthew Shipp is illustrious.

“The Art of the Improviser," Shipp's significant new double-CD release on Thirsty Ear Records represents, the pinnacle of his endeavors as a pianist, composer and bandleader. The trio featured on this major new recording—leader Shipp joined by Michael Bisio on bass andWhit Dickey on drums—will perform in the acoustically sublime Chapel of Our Lady Restoration, 45 Market Street overlooking the Hudson River in Cold Spring, NY on April 30, 2011 at 7:30 PM.

Admission is $15, and $10 for students and seniors —tickets are available at the door, as will be copies of the new CD as well as many others featuring the trio (and each artist individually) in the Matthew Shipp Trio.

The concert has been underwritten by Gail Greet Hannah.

Matthew Shipp was born December 7, 1960 in Wilmington, Delaware. He started piano at 5 years old with the regular piano lessons most kids have experienced. He fell in love with jazz at 12 years old. After moving to New York in 1984 he quickly became one of the leading lights in the New York jazz scene.

He was a sideman in the David S. Ware quartet and also for Roscoe Mitchell's Note Factory before making the decision to concentrate on his own music. Mr Shipp has reached the holy grail of jazz in that he possesses a unique style on his instrument that is all of his own&#151and he's one of the few in jazz that can say so.

Mr. Shipp has recorded a lot of albums with many labels but his 2 most enduring relationships have been with two labels. In the 1990s he recorded a number of chamber jazz CDs with Hatology,a group of CDs that charted a new course for jazz that, to this day, the jazz world has not realized.

In the 2000s Mr Shipp has been curator and director of the label Thirsty Ear's “Blue Series" and has also recorded for them. In this collection of recordings he has generated a whole body of work that is visionary, far reaching and many faceted.Matthew Shipp is truly one of the leading lights of a new generation of jazz giants.

As a recording artist Michael Bisio appears on over 50 CDs, he is leader on 10 CDs and co- leads 7 duet recordings. His recorded output has consistently met with critical praise. Michael's first international release, In Seattle, (Silkheart), was chosen as one of the “Best Jazz Records of the 1980's" in the Village Voice. Connections, (CIMP), 2005, as reviewed in Cadence Magazine. ..."this is another important disc from Bisio and company that highlights Bisio's talents as a musician, composer and bandleader."

Fourteen new releases in 2009 included two MBQ CDs for CIMP and Not Two, two CDs by Tomas Ulrich's Cargo Cult, and Old Dog, By Any Other Name, (Porter Records). The very beginning of 2010 saw the release of Session at 475 Kent, duets with the highly acclaimed pianist Connie Crothers on MutableMusic.

As a composer Michael has been recognized with nine project grants from various arts organizations, in 2003 he was awarded an Artist Trust Fellowship. Seminal studies in creative music processes were with Bill (William O.) Smith and Stuart Dempster. Early tenure with trumpeter Barbara Donald and saxophonist Carter Jefferson left an indelible mark on Michael's music and spirit. Another major influence is Joe McPhee.

Joe and Michael have created a body of work that includes two duo CDs, Finger Wigglers and Zebulon, (CIMP) in addition to over a dozen other releases including: Port of Saints, (CJR), Joe Giardullo's Shadow and Light, (Drimala), and Angels, Devils and Haints, Joe Mcphee and the World Bass Quartet, (CJR).

Whit Dickey made a name for himself as the former drummer of David S. Ware's famous quartet. Since then Dickey's musical contributions have gone well beyond his work as Ware's drummer. He is capable of tremendous power and yet has the ability for subtle gesture. Dickey is a composer as well as a drummer and his music has reached new heights in his recent small group work, with a coterie of great musicians including alto saxophonist Rob Brown. He has also performed with Matthew Shipp since 1991 and continues to play and record with Joe Morris, Roy Campbell, Jr., Mat Maneri, Chris Lightcap and many others. Dickey latest record, Sacred Ground, is available on Clean Feed Records.

On the banks of the Hudson River, in the heart of the Highlands opposite West Point, The Chapel of Our Lady Restoration is a national historic landmark, built in 1833 in the Greek Revival style. Fifty miles north of New York City, across from Metro North Railroad Station and within walking distance of the charming 19th century village of Cold Spring, the Chapel, a not-for-profit organization which has no religious affiliation, hosts the renowned Sunday Music Series and Sunset Reading Series. A beautiful and serene setting for weddings and other private gatherings, such as christenings, commitment ceremonies, renewal of vows and memorials, it is also a place of repose and contemplation for visitors to its grounds offering spectacular views. Originally known as Chapel of Our Lady.