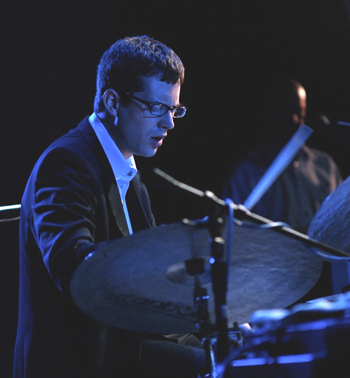 Black Elk's Dream, drummer/composer Matt Slocum's most adventurous and visceral recording to date, features eleven new original works as well as Pat Metheny's “Is This America?". Inspired by the visionary Native American leader Black Elk and the book Black Elk Speaks, Slocum composed and arranged the project for an innovative cast of longtime friends and creative associates including saxophonists Walter Smith III & Dayna Stephens, pianist Gerald Clayton and bassist Massimo Biolcati. On this outing, his third as a leader, Slocum and the ensemble expand significantly upon the artistic promise and chemistry displayed on their acclaimed recordings After the Storm (2011) and Portraits (2010).

Black Elk's Dream highlights a distinctive passion for flowing mixed meters, lyrical melodies and unconventional harmonic and improvisational structures. A somewhat unique aspect of Slocum's approach to composition is the way he tailors each piece specifically to the unique voices and strengths of the artists for whom he is writing. He is the recipient of composition grants and commissions from the American Music Center, the Puffin Foundation, New Music USA and Meet the Composer, and his ensembles have recently been featured at many of the premier festivals and venues throughout North America and Europe. JazzTimes describes Slocum as “a thoughtful composer who sets up his team like a savvy point guard running an offense." His writing draws inspiration from a wide range of sources, both within and outside of the jazz idiom. On this project one can hear the influence of Wayne Shorter, Dave Holland, Paul Motian, Billy Strayhorn and Maurice Ravel, yet Slocum's musical language remains largely non-derivative.

A major component of the recording is reflecting the duality of the intense spiritual beauty of Black Elk's great vision and the darkly challenging struggles the Oglala Lakota faced in their efforts to bring the vision to physical reality. After opening in the relative future with “Pine Ridge" and “Ghost Dance", Black Elk's Dream traces the evolution of that vision from its inception. Slocum creates a thematically connected body of work throughout the album, enhancing the arc and flow by revisiting and developing variations on the title track through the piano interludes “A Dream Revisited" and “End of A Dream".

Slocum noted, “It's become increasingly important to me to have a storyline, whether real or imagined, on which to base compositions. I think the directness and imaginative beauty of John Neihardt's Black Elk Speaks opened some new possibilities to explore in terms of mood and color as well as harmonic and rhythmic frameworks. It took about two years to get the music to a point where it was ready to be recorded, but the struggle was beneficial in the sense that it encouraged me to keep building. While writing I started to hear elements of both Walter and Dayna's playing in the music. Even though I generally prefer consistent personnel throughout a recording, in this situation I feel that having both of them enhances the mood and flow of the music."

The record begins with a haunting view from above through a lyrical reflection on “Pine Ridge". The quartet's compelling chemistry and organic approach are immediately evident as they navigate through rubato passages mixed with hazily implied time. Slocum notes, “This was the first tune and first take of the sessions. I like the sense of elasticity and the spontaneity that Walter, Gerald and Massimo bring to this track."

“Ghost Dance" juxtaposes a floating saxophone melody with a trance-like groove filled with flowing mixed meters and anticipations. The track builds throughout Smith's evocative improvisation to the driving, explosive piano trio interaction during Clayton's and Slocum's inventive solos. The drummer/composer explains, “normally I write melodies first, but in this case I started by experimenting with grooves for a bass line. I don't really think of songs in terms of bar lines or beats per measure until I need to write them out. Then I'll record myself playing the song and listen back to transcribe what the meters and rhythms are."

“Yerazel", an Armenian word that means “to dream", highlights Dayna Stephens's warm, dark sound in the lower register of the saxophone as well as the trio's musical depth and sensitivity. “In this piece the element of dreaming is meant in a more passive sense, whereas the title track uses the word dream synonymously with vision. I tried to create a floating, somewhat mysterious, mood of innocence and beauty to reflect the period of Black Elk's youth after he had received his great vision, but before he fully understood its meaning and significance," explained Slocum.

“Prelude" and “Black Elk's Dream", both part of the same composition, form the main theme of the recording. Slocum ventures into more extended and through-composed territory with this work, balancing and reintroducing multiple themes throughout the richly textured musical landscape.

Smith and Slocum's masterful duo dialogue at the beginning of “A Blues" is a highlight of the album. “Given B.B. King's description of the blues as “an expression of anger against shame and humiliation", and given all of the broken promises and inhumane treatment that the Oglala Lakota endured courtesy of our government, I felt that the inclusion of a blues in this project was merited. Plus it would be borderline criminal to be in the studio with Walter and not record a blues," said Slocum.

“Is This America?"- “This is one of my all-time favorite Pat Metheny compositions. It's my understanding that he wrote it in response to Hurricane Katrina, but the mood, intentions and sentiment also seem very appropriate for this project. The song is genius in its simplicity and lyrical beauty. I kept all of the original harmony and made just a few minor changes to the arrangement," explained Slocum.

The interlude “A Dream Revisited" showcases Gerald Clayton's refined touch on a variation based on the closing section of the title track.

“Black Hills", the only quintet track on the recording, features Stephens and Smith improvising beautifully together as they build gradually from a meditative dialogue to a powerfully evocative peak. Slocum describes “Black Hills" as “the emotional climax and turning point of the recording", noting that, “this piece could be considered a musical response to the massacre at Wounded Knee."

He characterizes the tune “Days of Peace" (and its placement in the track order) as “intended to create the illusion of a daydream- a mood of playfulness and warmth through a flashback to a brighter time before everything became seemingly lost and broken. “A Disappearing Path" and “End of a Dream" are meant to reflect some of the sadness and resignation in the closing lines of Black Elk Speaks while also paying tribute to the beauty of the lost dream."

More about Matt Slocum: Hailed as “one of America's pre-eminent young jazz drummers" (OC Weekly), Matt Slocum has also earned a reputation as a distinctive, inventive and lyrical composer. Slocum is the recent recipient of composition grants and commissions from the American Music Center, New Music USA, the Puffin Foundation and Meet the Composer. His ensembles have been featured throughout North America and Europe at venues such as Jazz at Lincoln Center, Yoshi's, the Blue Note, Earshot Jazz Festival, Saratoga Jazz Festival, Twin Cities Jazz Festival and the Soka International Jazz Festival among others. Frequently referred to as a “musical" drummer, Slocum possesses a uniquely personal voice on the instrument and is a propulsive, melodic and dynamic accompanist and soloist. He has performed and/or recorded with artists such as Seamus Blake, Alan Broadbent, Steve Cardenas, Gerald Clayton, Taylor Eigsti, Aaron Goldberg, Jon Irabagon, Larry Koonse, Wynton Marsalis, Lage Lund, Linda Oh, Alan Pasqua, Jerome Sabbagh, Jaleel Shaw, Walter Smith III, Anthony Wilson, Sam Yahel and the Dallas Symphony Orchestra.

Born in St. Paul, Minnesota and raised in western Wisconsin, Slocum began musical studies on piano before switching to percussion at age 11. While in high school he was introduced to jazz through recordings featuring Max Roach and Philly Joe Jones. He received a full scholarship to attend the University of Southern California where he studied with Peter Erskine. After graduating in 2004, Slocum spent three years in California before making the move to New York in fall 2007. His debut recording Portraits was released in January 2010. The New York City Jazz Record raved, “With this excellent premiere, Slocum steps out of the box as the full package," while All Music Guide wrote, “This auspicious debut should put Matt Slocum's name firmly on the jazz map." After the Storm, a more introspective trio recording, was released in October 2011 and received high marks from DownBeat Magazine, JazzTimes, The Los Angeles Times and Jazzwise among others. After the Storm was one of 15 recordings by American composers to receive a New Music USA recording grant in 2011.

“The solid interaction of the trio and the versatility of each musician fill the tracks with life. Layered richness is at the heart of the music." - DownBeat Magazine

“As a follow-up to his outstanding debut as a leader, Portraits, Matt Slocum settles into a rare telepathy with pianist Gerald Clayton and bassist Massimo Biolcati on this enchanting trio outing. A tastefully polyrhythmic drummer with a penchant for melodicism on the kit." - JazzTimes

“One of his generation's most highly regarded drummers and composers." - Jazz Police

“Matt Slocum has emerged as one of the great young drummers in New York City, and therefore all of jazz... Slocum clearly places empathy and ensemble eloquence over solo fireworks, with sublime results." - Minneapolis Star Tribune