On this September night, trumpeter Markus Rutz and his band came out swinging! 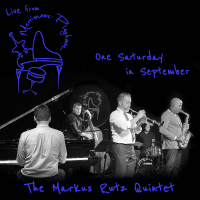 slideshow
With this fifth recording as a leader, Markus Rutz invites listeners to a seat for a live performance from “A Home for Jazz” in the Midwest, Merrimans’ Playhouse in South Bend, Indiana.

Many performances are stellar nights of good feeling and shared experience that exist only in that time and space where others do not have the opportunity to hear the magic. Well You Needn’t fret because the fire and Serenity of the evening was documented on these tracks recorded One Saturday in September at this “Sonic Art Gallery”.

The audience listening to the two sets from the band that night heard a program with tunes penned by Rutz along with standards from the idiom and original arrangements of themes from "Rhapsody in Blue" by George Gershwin. The themes are an extension of Gershwin’s thematic music which have been commissioned by The Rose Theatre with Markus as composer-in-residence.

“A Home for Jazz" Merrimans' Playhouse is a nonprofit, 501(c)(3) venue, established as an arts and educational organization, to promote the art and education of jazz in our community.

The venue is artist-driven, where the artists have the freedom to present their work to an appreciative audience. It is a true listening room, a “Sonic Art Gallery”.

A musician with a melodious, compositional pen and trumpet sound that has been called gorgeous.

The last few years have been years of achievement in performances and recording with local and national honors. In autumn of 2019, the album Blueprints Figure One: Frameworks was released that had tracks which were chosen for a story from NPR’s Morning Edition. This volume and the second volume of music from the project that was released in September 2020 as Blueprints Figure Two: New Designs were each in consideration for a Grammy nomination. New Designs had recognition with reviews and accompanied by several radio interviews and global radio features notably in France and Germany. Closer to home in Chicago Markus was selected as a representative of Chicago Music for the 2020 Year of Chicago Music.

A trumpeter from the age of nine, post-secondary musical studies took him to the University of Wisconsin-Madison, Berklee College of Music, and the University of New Orleans where Rutz graduated with a Bachelor of Arts.