SOURCE: TWO FOR THE SHOW MEDIA
September 9, 2009
Sign in to view read count 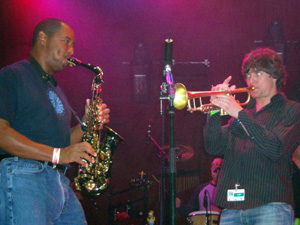 Returning to NY for this special evening, PEM recording artist Mark Rapp says, “One of my first demo CDs I recorded in NY, although not directly influenced by Bitches Brew, is directly within it's experimental and ambient vibe; so, I'm very excited to delve into this music and pay homage to the brilliant artist Miles Davis is. In honor of the concert, I'll be releasing some of those demo cuts on my web site next week." The Mark Rapp Group will also perform select songs from Mark's debut record Token Tales and new original compositions by long time bandmates Rene Hart and Jamie Reynolds.

Also performing that evening are Derek Lee Bronston and Michael Bellar's AS-IS Ensemble. Derek has a number of recordings out one of which features trumpeter Tom Harrel.

Michael Bellar, who currently tours with Blue Note recording artistAmos Lee, will be celebrating the release of the AS-IS Ensembles' sophomore CD entitled Turned On Turned Up.

The evening will conclude with the newly formed and aptly named collaborative group, The Side 2 Experiment, which is comprised of members of the Mark Rapp Group, the AS-IS Ensemble and DLB. The Side 2 Experiment will then present selections from the B-side of Miles Davis' Bitches Brew.

Located in the East Village area of Manhattan, DROM is a multi-event venue with a restaurant and lounge (similar to the Jazz Standard, Joe's Pub, Le Poisson Rouge and others).