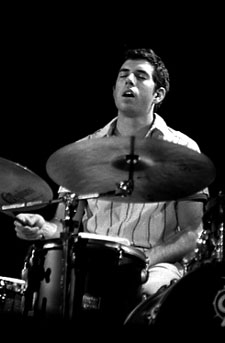 One would be hard pressed to find a more intrepid musician on the scene today than drummer, composer, bandleader and educator Mark Guiliana. Since audiences were first exposed to his singular drum set and compositional artistry (mainly through his early years with bassist Avishai Cohen), Guiliana has always set the bar extremely high in terms of envelope-pushing, uber-creative playing. Fast forward to 2014, and the drummer has already had a storied career, spending the last decade traversing across six continents with celebrated artists such as Meshell Ndegeocello, Gretchen Parlato, the aforementioned Avishai Cohen, Matisyahu, Lionel Loueke, Jason Lindner's Now vs. Now, Dhafer Youssef, not to mention leading his own groups, Beat Music and Heernt, through innovative sonic explorations documented on two critically-acclaimed releases, Beat Music (Rockwood Music Hall Recordings), and Locked In A Basement (RazDaz Records).

Guiliana has appeared on over thirty recordings to date, and his forward-thinking, conceptual approach to the instrument is currently featured in Mehliana, the electric duo he co-leads with Brad Mehldau on keyboards and synthesizers. After first getting together to play in 2008, their highly anticipated debut album, Mehliana: Taming the Dragon (Nonesuch), was released in early 2014. Mehldau elaborates on working with Guiliana, “Mark has his own thing, quite simply-but, I mean, really... Mark's already influencing a lot of other drummers, and influencing the scene more generally... I consider this a collaboration in the total sense of the word." (From Mehldau's interview with Ian Patterson on AllAboutJazz.com).

On September 2, 2014, Guiliana will be diving head first into another creative endeavor, the launch of his new record label, Beat Music Productions. The label will be flying out of the gate with two new recordings, My Life Starts Now, and Beat Music: The Los Angeles Improvisations. Guiliana will be celebrating the launch of Beat Music Productions, and the new releases, coast to coast, August 28 & 29 at The Blue Whale in Los Angeles, CA, and September 8 at The Blue Note in New York City.

With the release of My Life Starts Now (which is often referred to as the New York album), and Beat Music: The Los Angeles Improvisations, Guiliana engages in an exercise in duality; two coasts, two albums, two approaches, one completely improvised and one composed, and two sides of this artist's striking arsenal.

On My Life Starts Now, the band, featuring Guiliana on drums and electronics, along with Stu Brooks on electric bass, Yuki Hirano on keyboards, Michael Severson on guitar, the voices of Jeff Taylor and Gretchen Parlato, and spoken word from Meshell Ndegeocello, uses the fourteen original compositions to explore electronic textures married with, and carried by, provoking beats and rhythmic assertions, often augmented with emotive spoken-word performances. The music is reflective of the new beginnings that Guiliana is experiencing in his life now, in 2014; the process of creating new music and launching Beat Music Productions, and the life-altering adventure of starting a family. The music has the potential to move the listener, emotionally, physically, and in its many evocative moments, mentally as well.

On August 19, 2013 Guiliana and three of his favorite musicians set up in a small studio in Los Angeles and improvised for the entire day. The results are here, on Beat Music: The Los Angeles Improvisations. All of the music was performed in real time by four distinct musical personalities creating one “voice", in the moment, with no overdubs. The album captures the confluence of four “rivers", influence, inspiration, risk-taking, and open-minded and openhearted engagement in the avant-garde. Guiliana elaborates, “this session was inspired by a handful of shows throughout the past few years that created many musical moments that I wished had been documented. This specific configuration, with Tim Lefebvre on electric bass, Jeff Babko on keyboards, and Troy Zeigler on electronics, has cultivated a selfless and compositional approach to group improvisation that I think we really captured on this album."

This is just the beginning for Beat Music Productions. Future projects will include the debut album from the Mark Guiliana Jazz Quartet (featuring new compositions from Guiliana for an acoustic quartet); a solo electronic recording (an exploration of experimental beats and ambient textures); and a long overdue second album from Heernt, Guiliana's experimental-garage-jazz outfit.

“A drummer around whom a cult of admiration has formed..." —The New York Times

“Beatmakers will be sampling this guy... for years to come" —All Music

“(Guiliana) may well be at the forefront of an exciting new style of drumming..." —Modern Drummer 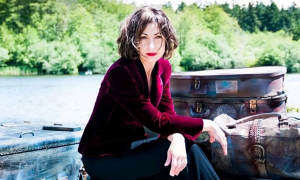