[Family First] is resistant to pigeonholing. It's an all-acoustic outing deeply rooted in postbop that illustrates Guiliana's connection to swing-based music, even if he routinely displaces rhythmic patterns and fractures steady time. --Peter Margasak, The Chicago Reader 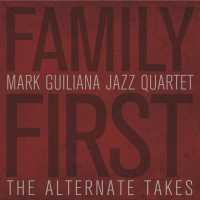 With the June 4, 2015 release of Family First, drummer/composer/bandleader Mark Guiliana and his Jazz Quartet featuring Jason Rigby (tenor saxophone), Shai Maestro (piano) and Chris Morrissey (bass), brilliantly created a melodic and rhthymic landscape that delighted audiences and provoked rave reviews from critics. Family First marked the third release in a year on his own Beat Music Productions (following up My Life Starts Now and Beat Music: The Los Angeles Improvisations), and Guiliana is now excited to announce the companion/follow-up release to Family First, Family First: The Alternate Takes. The Alternate Takes CD offers up a new listening experience, featuring alternate takes on “Long Branch", “ABED", “The Importance of Brothers" and Bob Marley's “Johnny Was", as well as two new tunes, Guiliana's “1980", and the Quartet's version of Rufus Wainwright's “Beautiful Child".

Guiliana's singular drum set and compositional artistry, once again setting the bar quite high, is on glorious display on Family First: The Alternate Takes, as is the playing of his collaborators. Once again Guiliana has used the freedom of running his own label to bring music to listeners that might never have been heard. “After two incredibly fun and productive days in the studio, I knew we had too much material to fit on one record, “ said Guiliana. “Chris, Shai, and Jason consistently delivered inspired performances, making it difficult to choose 'the one,' and in several instances, I felt very connected to versions that didn't end up on the record. It's exciting to be able to share this material that would otherwise just be hiding on a hard drive somewhere in my apartment."

The sound presented on Family First is quite different from Guiliana's 2014 releases, and Family First: The Alternate Takes presents yet another soundscape, giving the listener a different perspective on the music. This purely acoustic music is presented without edits or isolation, as captured in pristine detail by engineer John Davis at the Bunker Studio in Williamsburg, Brooklyn. While not a tribute recording in any way, this recording is another nod to the jazz drummers that have inspired and informed Guiliana's completely unique approach to the instrument. Guiliana elaborates, “the music that this Quartet plays embodies the deep inspiration I have taken over the years from my earliest drumming heroes, including Tony Williams, Roy Haynes, Elvin Jones, and Art Blakey, to name a few."

Although this is a fairly new band, Guiliana shares a deep musical history with each musician. “These guys are some of my favorite musicians and I've been lucky to be building a musical bond with each of them over the past decade," he explains. “I've been playing with Chris in my electronic project Beat Music, with Jason in my first band Heernt, and I spent a handful of great years on the road with Shai in bassist Avishai Cohen's trio." Family First: The Alternate Takes encapsulates all the best that these musicians have to offer—abundant beauty, ardent propulsion and sheer love of improvisation.

The Critics on Mark Guiliana

“Mark Guiliana is a young drummer with a cre- ative command of electronics. Here he debuts an acoustic quartet worthy of admiration. Quiet, minor and processional, Family First is an understated, friendly album ripe with gorgeous melodies. Guiliana's plugged-in music has been a treat, especially last year's My Life Starts Now. Hopefully, we will be hearing more from this acoustic quartet." —Paul de Barros, DownBeat Magazine, Four Stars

“Groove has often been the absolute priority for the drummer Mark Guiliana, to strong effect. Family First, the third release on his own Beat Music label... shifts his emphasis toward melody and interplay." —Nate Chinen, The New York Times

“For many observers, he's the guy to watch if you want to know where the great art of drumming is right now—and where it could be headed." —Modern Drummer Magazine