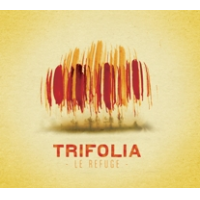 ‘Le Refuge’ is Marianne’s fifth compact disc recording. The album was recorded in Montreal at Studio Pierre Marchand and was produced by Marianne Trudel. “Le Refuge is distributed by Select Distribution.

Marianne Trudel is an energetic and passionate artist whose style cross-cuts a wide swath of musical interests. In 2007, she was the recipient of the Montreal International Jazz Festival’s Prix Étoiles Galaxie de Radio-Canada. As a performer, she pursues an active career in a variety of settings ranging from solo performance, to more intimate duos and trios, larger groups as quintet, septet and large ensembles with performances to date in Canada, United States, France and Germany.

On June 18th, 2013, Trifolia will embark on a Canadian tour across seven Canadian provinces from as far west as British Colombia to the east in St John’s, Newfoundland and Labrador performing at this country’s great festivals and events. The official compact disc launch of “Le Refuge” will take place in Marianne’s home city at The Montreal International Jazz Festival on July 4, 2013 at L’Astral Theatre at 6:00 pm.

In addition to the Trifolia Canadian Summer Tour 2013 , Marianne will make her United States debut as a solo pianist for two concerts at the Xerox Rochester International Jazz Festival on June 29 2013, as part of a prestigious series that includes other international artists such as Geoffrey Keyser, Howard Levy, Cyrus Chestnut and Bill Dobbins . She will also perform with the Montreal Symphony Orchestra at Montreal’s Olympic Park on August 14, 2013 under the direction of Kent Nagano and animated by Marc Hervieux. The program includes Rhapsody in Blue with other pianists including Lorraine Desmarais. On September 6th, 2013, Marianne will perform at the Guelph Jazz Festival, in Guelph, Ontario, as part of a trio with two pioneers of American improvised music - contrabassist William Parker and drummer and percussionist Hamid Drake.