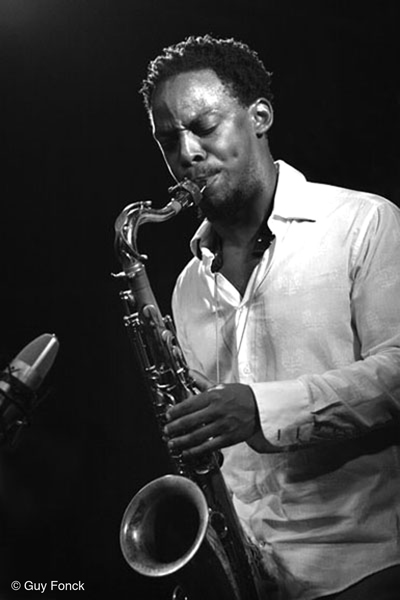 Recorded Live at The Jazz Standard, April 3, 2007 and available NOW

“Marcus Strickland has started to turn heads in the most thriving but most competitive jazz scene on the planet . . . his tone: liquid and luminous, yet forceful and exact." - Thomas Conrad, JazzTimes

While Marcus Strickland and his identical twin brother were still in their mother's womb, his parents had planted, and nurtured the seeds for his new recording, Open Reel Deck (Strick Muzik). Strickland explains, “My pop would place my mother's belly near the stereo speaker in hope that we would hear the music from inside. It was timeless music - as in void of fad, free of capsulation. Hendrix, Stevie Wonder, Earth, Wind & Fire, John Coltrane, Freddie Hubbard, Parliament, etc, were all blasting from our parents' instrument of choice during that crucial period of my life - an Open Reel Deck Stereo System (O.R.D.S.). For me, the O.R.D.S. has become a nostalgic metaphor not just for quality, but also for the accumulation of quality regardless of style or familiarity - notice the first word of O.R.D.S. is OPEN. Hence the name for this record is Open Reel Deck - one of my most adventurous projects yet."

Open Reel Deck captures the unveiling of Strickland's new fresh sound to an audience at the Jazz Standard in NYC on April 3rd, 2007. The music, as described by Budd Kopman of All About Jazz, “was very powerful, with some of the deepest grooves I have heard in a long time. The extremely solid team of Henderson and E.J. Strickland laid down African rhythms combined with funk as Henderson played long vamp lines that had a strong accent on the first beat of the measure. . . . the rhythm section created an extremely strong-body feel, which all the musicians, especially the trumpeter Harrold, and the audience could not help but move to." Throughout the electrically charged atmosphere of “Open Reel Deck" the Twi-Life group displays Strickland's extraordinary compositional skills through funk, hip-hop, afro-beat, rock, ska and jungle grooves, while also showin' off the versatility of his twin brother E.J. on the drums.

In addition to the Twi-Life Group, Marcus Strickland (tenor saxophone), Mike Moreno (guitar), Carlos Henderson (bass) and E.J. Strickland (drums), Open Reel Deck features trumpeter Keyon Harrold, who has always caught Strickland's attention with his “gritty and fiery solos." Besides helpings of these solos, the trumpeter adds an orchestral element to the band's accompaniment of the album's other featured artist, Malachi. Strickland elaborates on the considerable contributions of the hip-hop-tinged poetry of Malachi on Open Reel Deck; “No, Malachi is not a rapper - he's a spoken word lyricist. Unlike a rapper who basically applies every syllable to each beat or a poet who recites poetry with music in the background, Malachi phrases his (mostly improvised) poetry over grooves in much larger increments than syllables. Armed with an epic-like, commanding voice, Malachi was the perfect choice for this project."

We have already witnessed an exciting career for the Miami-raised soprano and tenor saxophonist, who was named 'Best New Artist' in JazzTimes Magazine's Reader's Poll '06 and came in third in the “Rising Star-Soprano Saxophone" in the 2007 DownBeat Critic's Poll; has two releases on Fresh Sound New Talent Records as a leader ("At Last" and “Brotherhood"); and currently plays with Dave Douglas, Jeff 'Tain' Watts, and Will Calhoun. Marcus Strickland also recently ended a five year stint with legendary drummer Roy Haynes. Although the saxophonist has been on two Grammy-nominated recordings in a row ("Fountain of Youth" - Roy Haynes & “Keystone" - Dave Douglas, Greenleaf Music), the most intriguing part of this success is that Strickland's career has really just begun. This is definitely indicated by his latest venture, Strick Muzik, his own record label, which was launched in 2006 with an adventurous double CD project featuring two bands of his and appropriately titled with a play on words, “Twi-Life". Open Reel Deck is Marcus Strickland's exciting new follow up release on Strick Muzik.

In middle school his first band teacher immediately recognized Marcus' talents. Because Strickland started on the alto saxophone at the age of 11 with a deep interest in jazz, his teacher already had him learning Charlie Parker solos by the age of 12. It was not long before Marcus and his equally talented brother decided to pursue careers as jazz musicians. Because of the saxophonist's understanding of music education's importance, Strickland also participates in Jazz Reach - an educational program founded by Hans Schuman that integrates film, narration and live music to educate children about jazz.