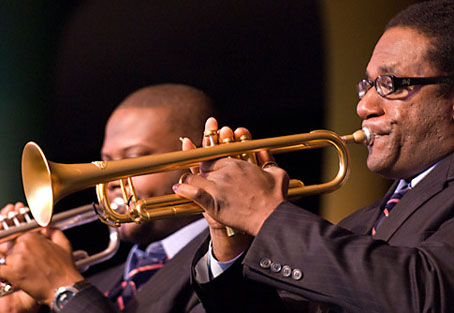 slideshow
What's a Young Lion to do when he starts to grow long in the tooth? Only a few years past forty, Marcus Printup still has quite a ways to go until he reaches retirement age though he's been in the game for several decades and paid a number of dues. One in particular ended up a lemons-into-lemonade affair. After a promising start on Blue Note stalled in the wake of waning corporate jazz tastes at the close of the last decade, the trumpeter found a new home on Steeplechase.

Stewardship from the Danish label continues to suit Printup and after four albums as a leader he's still got his stride. Ge also maintains a mutually-beneficial relationship with his mentor Wynton Marsalis through a regular post in the Lincoln Center Jazz Orchestra. The members of his band on this date share employment in the same umbrella organization and their resulting camaraderie allowed for a minimal of rehearsals.

As the album title denotes, the tune list has a pronounced ballad bent. Only the closing “Blues All Night" strays from the overarching romance-rich theme. Printup cops to an abiding affection for the form in the notes, claiming that it's the avenue he expresses himself best through. The music bears out the contention, as his burnished, calm-inducing phrases glide against the conventional rhythm section and in warm collusion with the smooth articulation of his frontline partner, trombonist Chris Crenshaw.

Printup prudently varies the program, cognizant of the potential for predictability in such a measured and mellifluous setting. Pieces pairing him with Crenshaw alternate with others highlighting his interplay with harpist Riza Hequibal. Mandel's “Emily" and “Jobim's “Corcovado", excise the other instruments altogether and allow for lovely dialogues of lush trumpet melody and dulcet harp accompaniment, the latter denuded of its signature bossa beat. Hequibal is also a dominant voice on her own “Lullaby for Nanay", this time working in league with pianist Dan Nimmer, Carlos Henriquez and drummer Quincy Davis for maximum grace and elegance.

Though Printup's playing is never saccharine or saturnine, swallowed whole, this set is still a shade too sweet in sum. A sharp palate-cleanser of Peter Evans or Toshinori Kondo might be necessary for the more bellicose listener. As cogent and creative wine and candlelight jazz goes though this set hits its mark.