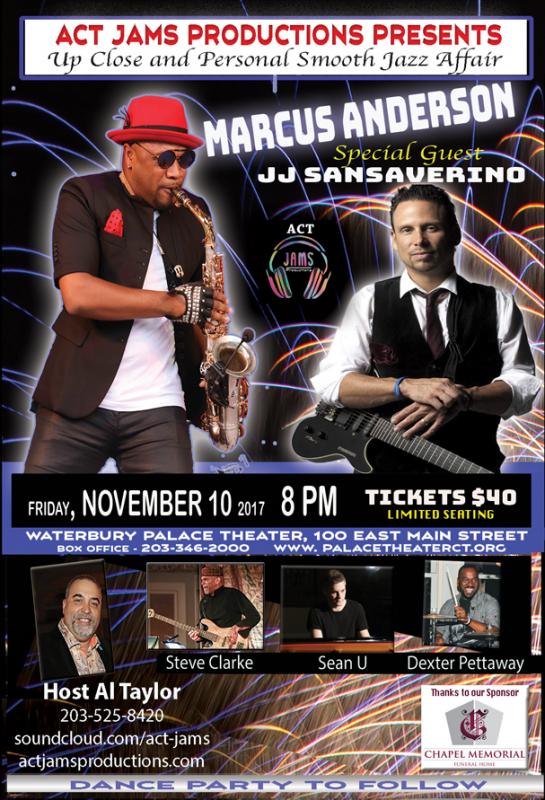 The show is followed by an Old School Dance Party. Hosted by Al Taylor of ACT Jams Productions. Tickets are $40 and it's a limited seating event. Powered by Chapel Memorial Funeral Home. Call Al Taylor @ 203 525-8420 for tickets and info or box office 203-346-2000 or visit palacetheaterct.org.

One of the premiere saxophonists in the world, Marcus Anderson is not only a sought after solo artist, but he is also known as being a featured saxophonist with the late Prince’s New Power Generation. Marcus has performed for audiences all over the world and has even accompanied other great artists such as CeeLo Green and Judith Hill. In addition to being a sax maestro, Marcus plays the flute, sings, writes, dances, produces and arranges music; his talent is undeniable to most audiences and to his peers.

As if that wasn’t enough, his accomplishments include ranking #1 on Billboard Smooth Jazz and SirusXM Radio Watercolors. This March 2017, Marcus released, Limited Edition which peaked on Billboard Jazz at #10 and the single release, “Will Power" debuted at #19 on Billboard Smooth Jazz. In a note, Marcus has taken his traditional smooth jazz roots and infused his music with R&B, Pop, Rock, Latin and funky grooves.

Now with the release of his sophomore CD, Waiting For You, from Innervision Records, JJ puts forward a stunning selection of original compositions. With the help of a stellar array of musicians, producers, and special guests, his singles “Back Talk” and “Gravy Train” have climbed many of the top radio charts.

An accomplished composer, arranger and musical director, JJ was playing trumpet and violin by the age of eleven and guitar by thirteen. Growing up in and around New York, JJ’s diverse influences of Santana and Hendrix, as well as Jazz, Motown and Doo- Wop, helped mold his unique guitar style.

He became the lead guitarist for Maxi Priest in 2000, embarking on the first of several world tours. In 2012, JJ signed to record label Innervision Records, releasing his first single “Swing Easy.” After distributing his CD worldwide, he started performing with Jazz greats such as Ricky Lawson, Victor Bailey and more.