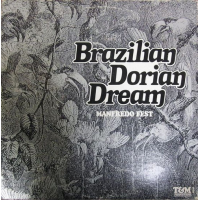 Manfredo Fest isn't the name of a multi-day rock festival for nerds. Fest was a Brazilian bossa nova and jazz keyboardist whose music was an eclectic and fascinating blend of bossa nova, classical and fusion.

Fest's father was a German concert pianist who emigrated to Porto Alegre in Southern Brazil, near Uruguay, where he taught at the university there. Blind from birth, Fest learned to read music in braille and studied formally. Influenced by Bill Evans and George Shearing, Fest, at 17, turned to jazz. He gigged at bossa nova clubs in São Paulo in 1961 and recorded his first album, Bossa Nova, Nova Bossa, in 1963. The album remains a classic.

By the 1970s, Fest was playing synthesizers. One of his best albums from this period was Brazilian Dorian Dream, with Fest on synths and Fender Rhodes, Thomas Kini on bass, Alejo Poveda on drums and Roberta Davis on vocals. The album has just been reissued by Far Out Recordings, and it's the closest you'll come to the beach this summer if you're wisely remaining indoors.

Stylistically, Fest on the album has much in common with Eumir Deodato and George Duke, blending bossa nova lyricism and swing with American fusion. The other bright light on this album is Roberta Davis, a little-known American jazz singer. Other than her recordings with Fest (Manifestations in 1978 and Braziliana in 1987), she recorded on Billy Higgins's The Soldier in 1979 for Timeless Records.

Unfortunately, Fest is little known in the U.S., where other Brazilian artists such as Deodato, Antonio Carlos Jobim and Sergio Mendes were more prominent. Fest's music was unashamedly bossa pop, but his classical background added a layer of dazzling sophistication and churning intensity that your ear will pick up on.

If you have time for just one track, here's That's What She Says...