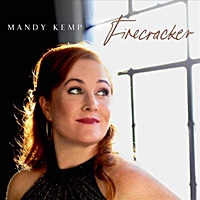 slideshow
Mandy Kemp is a singer with a passion for classic jazz vibes and unique textures. Recently, she released a new EP titled Firecracker. What’s really special about this release is definitely the fact that she combines her vocal versatility with an evergreen approach to the genre. The six tracks on Firecracker boast a classic feel and showcasing Mandy’s sultry vocal dynamics. The opening cut, “How Little We Know,” does an amazing job at combining excellent production aesthetics and Kemp's energetic performance skills. With songs such as “I Concentrate on You,” as well as “In a Manner Of Speaking,” Kemp showcases her wordplay and ability to seamlessly fit in with the music, controlling her dynamics to match the mood of each performance. This is a classy and sophisticated collection of songs that will certainly please any jazz aficionado. In a recent discussion, Kemp revealed her musical roots.

Q: What are the earliest memories of music you can recall?

A: Believe it or not, I have memories of being in my crib and hearing music coming from the record player. My parents tell me that anytime I cried as a baby, music was always the most effective method of soothing me. The music playing in my house when I was a child was mostly classic rock or '70s and '80s Top 40: everything from the Beach Boys and Elvis to Smokey Robinson, Barbra Streisand, and George Michael. Although my parents aren’t huge music lovers, they always recognized and encouraged my passion for it. And there were definitely early signs of my being a born entertainer: As a little kid—maybe five or six—I used to invite all the neighbors over and I’d put on productions of my favorite musicals, like Annie or The Sound of Music. I’d actually “cast” my little sister to play all of the other roles and I’d have us both dressed up in costumes and have some sort of “set”… I made it quite the big production!

Q: Do you recall a strong musical community in and around where you grow up, which is where, actually?

A: I was raised in the Silicon Valley; and, while the arts do have a presence there, I never saw much of a music scene, growing up. But to whatever extent there was music happening in my community, I usually found a way to participate. Throughout junior high and high school, I was very active in musical theater, both in school and outside, in the Bay Area’s community theater companies. I also became a founding member – and the youngest member, by far, at age 17—of a professional choral group called the San Jose Choral Project, that one of my first voice teachers, Daniel Hughes directed, and continues to direct.

Q: Why are you attracted to the styles of music on your EP?

A: My musical tastes are wide ranging, in general; but, diving into this genre, in particular, I have embraced a range of styles and incorporated them into my repertoire. I wanted my recording debut to represent that range and versatility—hence, the Latin, pop and funk influences that all show face in arrangements on the EP. What attracts me to jazz in the broader sense, however, is its improvisational nature. That aspect of it really opened up a whole new world to me: after always performing other genres of music in a very “by the book” way, so to speak, embracing a style of music where the art form has you serving the material written while also re-composing it in subtle way, is deliciously freeing and totally exhilarating. It also challenges me to be a better musician, and I love that challenge!

Q: Did you study music in school?

A: I have some formal training, but I never got any sort of degree in music. I took private voice lessons from the time I was 13 until I started college, and I attended a boarding school for the arts, Idyllwild Arts Academy here in Southern California, to get intense training in musical theater for my senior year of High School. My intention was to enter a 4-year college-conservatory program in Musical Theater. Following my high school graduation though, I spent the summer in a program for Rock Music Performance at Paul McCartney’s Liverpool Institute For Performing Arts in Liverpool, UK. It was a pretty wild time (you know, being that I was an 18-year-old at Rock school and all!) and I didn’t take particularly good care of my voice during that time, to be honest. When I started to experience vocal problems as a result of that, all of the “don’t put all your eggs in that basket” advice I’d been given really started to resonate, and it made me look at whether I was willing to invest in a music education, or whether I should “play it safe” and get one of those degrees that may be considered more “practical”. So ultimately, I did not take my study of music to a higher level; instead, I chose to pursue a Communications Degree at Northwestern University (because that seemed “safe”), and abandoned music altogether for the 17 years that followed. When I got back into singing several years ago, I had to look at what knowledge gaps I had there and work on those areas through workshops, classes, and independent study; and, as I’ve specifically moved into singing jazz and have begun working with really stellar musicians, I’ve definitely had to step up my technical skills and seek some of the formal education I previously bypassed from alternate sources.

Q: Which musicians have inspired or influenced you and how?

A: When I first started really listening to jazz, one of the first contemporary artists whose music particularly impacted me was Jane Monheit. So, when I eventually found out she lives in Los Angeles, I decided I wanted to study with her and sought her out for coaching. She and I clicked immediately, and she was very supportive of my musical goals, so when I asked her to produce my EP, she was really enthusiastic about it. Prior to meeting Jane though, I learned a lot about jazz just by listening to a ton of it – all styles and eras. In doing so, I think I found inspiration from listening to many of the “greats” – particularly Ella, Sinatra, Anita O’Day, Irene Kral... I’ve also found a lot of inspiration from artists who crossover between jazz and other genres in cool and distinct ways, like Eva Cassidy, Amy Winehouse, Robin McKelle, and Aubrey Logan. (In fact, Robin McKelle’s awesome, funky version of “Lover Man” specifically inspired the arrangement of “I Concentrate On You” that is on my EP.)

Q: Are there any artists who influenced you to change your approach to music and how?

A: The first person to formally teach me about jazz singing was Greta Matassa, who is a phenomenal jazz vocalist from Seattle: she gave me the fundamentals of phrasing, improvisation, and how to approach different rhythmic styles. Jane really helped me improve my ability to swing, and lock into a groove. And Jane really emphasizes lyrical interpretation and using the lyrics to inform musical choices – an approach that made a lot of sense me, probably because of my theater background.

Q: What led you to choose to the material on the EP?

A: Well, for me, the lyrics are almost always what first attract me to a song. I felt a special connection to the lyrics on each of these tracks. They're all very poetic in their own way, and I feel all of them have a connection to parts of my own life. In the case of the medley, though, that was my opportunity to mash up two songs I love and create a very different story with the end result. “Detour Ahead” sings about the ominous quality that comes when you know you're in the wrong relationship and “These Foolish Things” describes how intoxicating relationships can be... But when the medley arrangement jumps back to “Detour Ahead” for the ending, the story doesn't resolve the way it does by Detour’s original lyrics; rather, the part of the lyrics I chose ends the song with a sense of impending doom for the relationship. That may sound dark, but that is a very real-life outcome of some of the most intoxicating romances, right? And there’s beauty in the journey, even when the romance – or the story- doesn’t work out quite as planned.

Mandy Kemp will be performing live at Feinstein's at Vitello's in Studio City, CA on August 28 at 8 p.m.