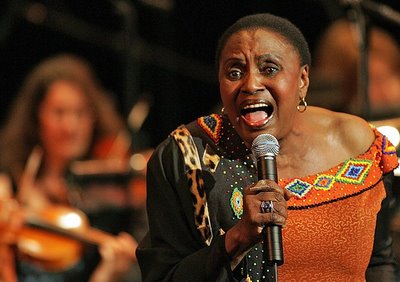 Produced by the Barbican; part of London Jazz Festival in association with BBC Radio 3, Commissioned by Festival d'Ile de France

I just told the world the truth, and if the truth then becomes political, I can't do anything about that Miriam Makeba, 2000.

An all-star celebration of the life of Africas best-known voice, who died last year at the age of 76. Curated by another giant of African song, Benin-born Angelique Kidjo, Mama Africa brings together some of the finest vocal talent the continent has to offer to pay tribute to Makeba. The shows triumphant premiere in September as part of the Ile de France Festival sold out three nights at the Cirque dHiver in Paris.

The former Johannesburg club singer quickly became a voice for the anti-apartheid struggle in her native South Africa. Despite world-wide fame on the heels of her role in the hit musical King Kong in 1959, she paid a high price for her activism. The South African government revoked her passport, effectively sending her into exile for 31 years; her 1968 engagement to Black Panther Stokely Carmichael in 1968 led US record labels to drop her and venues to cancel her performances. But her extraordinarily pure voice and the fame of hits like Pata Pata, Westwinds and The Click Song endured and she returned in triumph to South Africa after the fall of apartheid at the personal request of Nelson Mandela.

Miriam Makeba also has a key role in the acclaimed concert film Soul Power chronicling Zaire 74, the three-day music festival in Kinshasa which took place at the time of Ali-Foreman fight. Soul Power will be released on DVD as part of the Masters of Cinema on 16 November 2009.

From Cotonou in Benin, singer-songwriter Angelique Kidjo became well-known across West Africa before relocating to Paris in 1983. Signed by Chris Blackwell to Island, she had a series of international hit albums and collaborated musically with Carlos Santana, Herbie Hancock and Branford Marsalis among many others. Her most recent album, Djin Djin has appearance from Alicia Keys, Peter Gabriel, Joss Stone and Amadou and Mariam. She has been a UNICEF Goodwill Ambassador since 2002.

The London Jazz Festival in association with BBC Radio 3 is produced by Serious www.serious.org.uk