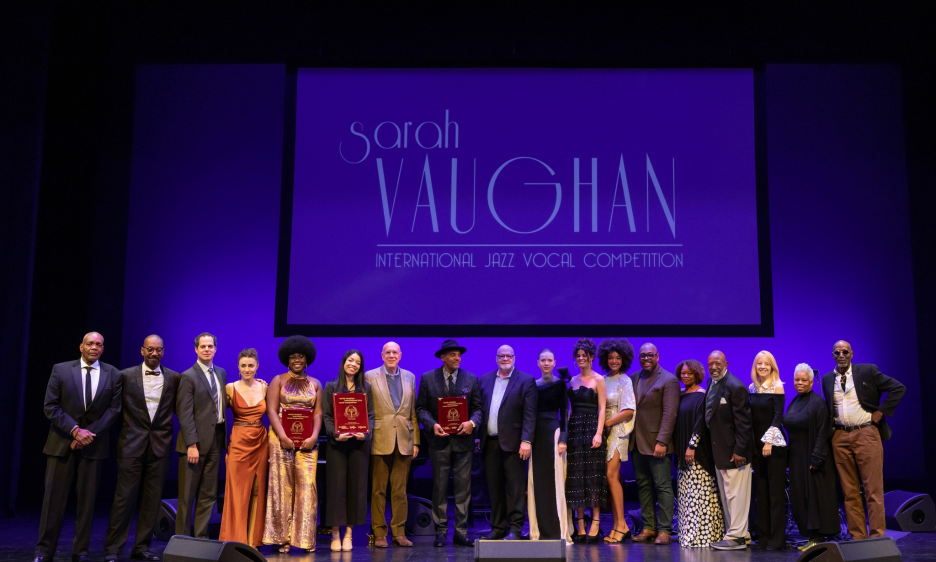 Recipient of a $5,000 cash award and winner of The SASSY Awards was Lucía Gutiérrez Rebollosowho wowed the esteemed panel of judges with the bebop standard “Donna Lee”. Rebolloso, a 21-year-old vocalist, born and raised in Veracruz, Mexico, grew up singing in the family's group, singing son jarocho, a blend of Spanish, African and indigenous Mexican influences—a style that originated on the Gulf Coast of Mexico. “It was a natural introduction to the many influences in jazz, with a strong reminder that at the center is a story to tell,” Gary Walker says. “Lucía's life story is one that will serve her well in jazz for years to come.”

The Second Place honor and $1,500 prize went to Ekep Nkwelle, a singer and songwriter who studied both Classical Voice and Jazz Performance at the Duke Ellington School of the Arts High School in Washington, D.C., and later attended Howard University, where she performed with the school’s prestigious vocal jazz ensemble Afro Blue. Third Place and a prize of $500 was awarded to Harlem-based Allan Harris, who as a child had the great privilege and honor to watch Sarah Vaughan perform live at The Apollo.

The competition recalls the humble beginnings of legendary jazz singer/NEA Jazz Master Sarah Vaughan (1924-1990)who, back in 1942, was a Newark teenager and winner of an amateur singing contest at the Apollo Theater. That memorable night helped launch the lifework of one of the most successful, influential jazz vocalists in the history of American music. Past winners include Cyrille Aimee, Jazzmeia Horn, Ashleigh Smith, Arianna Neikrug, Deelee Dube, Quiana Lynell, Laurin Talese, Samara Joy, Gabrielle Cavassa and Tawanda, and G. Thomas Allen. What has become one of the top annual vocal competitions in jazz, The SASSY Awards offers outstanding jazz singers a one-of-a-kind platform for embarking on a career in the music business—and offers audience members a chance to discover the jazz stars of tomorrow. The contest is open to singers over the age of 18, of all genders and nationalities, from anywhere in the world, and not signed by a major label. Entrants are judged on vocal quality, musicality, technique, performance, individuality, artistic interpretation, and ability to swing. For more information about The SASSY Awards, visit SarahVaughanCompetition.com.

The New Jersey Performing Arts Center (NJPAC), located in downtown Newark, N.J., is America’s most diverse performing arts center, and the artistic, cultural, educational and civic center of New Jersey – where great performances and events enhance and transform lives every day. NJPAC brings diverse communities together, providing access to all and showcasing the state’s and the world’s best artists while acting as a leading catalyst in the revitalization of its home city. Through its extensive Arts Education programs, NJPAC is shaping the next generation of artists and arts enthusiasts. NJPAC has served more than 10 million visitors (including over 1.9 million students and families) since opening its doors in 1997, and nurtures meaningful and lasting relationships with each of its constituents. NJPAC.org