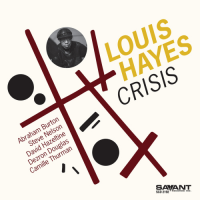 slideshow
Drummer Louis Hayes's first recording session was in 1956, on Horace Silver's Six Pieces of Silver (Blue Note). If that's all he had on his resume, you'd feel compelled to buy his new album, Crisis (Savant). But there was more, much more. From there, he weaved through jazz like a long vital thread traveling through a gorgeous suit. He appeared on dozens of the classic albums in the 1950s and beyond.

In the 1950s and beyond, Louis recorded extensively with Silver (Silver's Stylings of Silver, Further Explorations, Finger Poppin' and Blowin' the Blues Away) and on John Coltrane's Lush Life, and albums with Cannonball Adderley, Grant Green, Oscar Peterson, Joe Henderson, Dexter Gordon and Freddie Hubbard and so many others. The beauty of Louis is that he has always been able to shift fluidly between hard bop and other styles. On hard-charging songs, he saturates the air with shimmering cymbal bashes, driving hi-hat time and polyrhythmic shots on the snare and toms. On ballads, he provides hushed, concentrated sensitivity. He knows what the ear likes and has always been conscious of the listener's heart, not just the players' needs.

The 84-year-old drummer's new album features Abraham Burton (ts), Steve Nelson (vib), David Hazeltine (p), Dezron Douglas (b) and Camille Thurman, a terrific vocalist on two tracks. By the way, Thurman is a composer, saxophonist and member of the Jazz at Lincoln Center Orchestra. On the album, Louis salutes many of his playing partners over the years. Arab Arab is by Joe Farrell, Roses Poses is by Bobby Hutcherson, I'm Afraid the Masquerade Is Over is a vocal track by Thurman, Desert Moonlight is by Lee Morgan, Where Are You? is another vocal track, Creeping Crud is an original by Louis, Alien Visitation is by vibraphonist Steven Nelson, Crisis is by Freddie Hubbard, Oxygen is by bassist Dezron Douglas, and the standard It's Only a Paper Moon was an Art Blakey hard-bop staple.

The album is so solid. Much has to do with the songs and players chosen. Nelson on vibes is absolutely wonderful, adding cool, metallic tones and a swinging feel. Hazeltine on piano has never sounded better. And Burton is warm and searing on tenor sax. Hats off to the producer and engineer, whose mix here places Louis on top so you can hear him, without his drums overshadowing everyone else. Award-winning mic placement and mixing. I can't recall the last time I raved about these roles on an album. The executive producer is Maxine Gordon, Dexter Gordon's wife. The engineer and mixer is David Stoller. And it was recorded in January at the Samurai Hotel Recording Studio in Astoria, Queens.

And here's the title track...