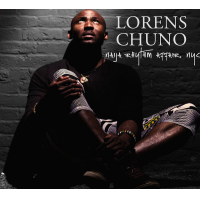 Since 2008, Lorens Chuno has played live sets that have been praised as “energy-filled", “captivating", and “educative". Over this period, the New York based Nigerian born musician has created a unique sound that can be broadly classified as West-African Jazz fusion. His warm and dynamic vocal style, along with his bold compositions, helps define this sound.

All the aforementioned qualities can be fully experienced in his new album, Naija Rhythm Affair, NYC. The songs are characterized by infectious jazz melodies, strong rhythms, and a rejuvenating energy that permeates. The singer describes the album as a collection of melodies and lyrics that address contemporary issues from the perspective of a new generation African. Having lived in the U.S. since his late teenage years in the early 2000's, and having traveled the world between then and now, Lorens Chuno is placed in the perfect position to address such issues.

The album consists of ten original songs, which are all composed, written, arranged, and produced by Lorens Chuno. Lyrically the songs directly take on issues that are not necessarily related to one another, but come together to form a cohesive body of work. “Come My Way" and “Do Not Call" for instance, address the often tacit negotiations that come with building a relationship and the difficulties of letting go, while the Igbo lyric of “Nuru Onum" calls for dialogue, wisdom, and understanding within a community. “Changing" talks about the intricacies and inevitability of globalization, and “Mr Sabi" pokes fun at how Westerners, even when they have good intentions, do not care to understand Africa. “Wait" directly and fearlessly tackles the issues of police brutality and the deep-seated racism in America.

Although it is the product of a solid jazz foundation, the album makes an uncontrived effort to incorporate every element of Lorens Chuno's musical background, including Soukous, as can be in heard in “Today", Fela Kuti's Afrobeat as can be heard in “Mr Sabi", and traditional Igbo ¾ rhythms as can be heard in “Nwayo" and “Nuru Onum". The singer's jazz background becomes very apparent in “Easy Busy" which features a temporal alternation between Bossa and Swing, and “Changing", a song whose saxophone solo cruises smoothly on the circle of 4th's for 16 bars, starting on an A-flat major chord and ending on an F-major chord.

The album features well commended up and coming jazz talents including bassist John Gray and drummer Michael Vitali. The album also features award winning guitarist Albino Mbie, whom Lionel Loueke has praised as a guitarist that “needs to be heard by the whole world!", and saxophonist Michael Easton, a well respected protegé and collaborator of David Liebman's.

A talented vocalist, pianist, percussionist, and dancer, Lorens Chuno has played several concerts, many a time, sharing stages with international acts like the Chicago Afrobeat Projects, and the Sierra Leone Refugee All Stars. Lorens Chuno has worked with some legendary jazz musicians including drummers Poogie Bell and Roger Humphries, and pianists Howie Alexander and Marc Cary. Lorens Chuno has also garnered a few international recognitions including an appearance on the Nigerian Television Authority “Celebrity Corner" program and the African Independent Television (AIT) “Artist's Notebook".